Here is a man who has been much in the news over the past few years thanks to the rather large number (relatively speaking) of films that have been made about him recently – so far 5 and counting, the most recent effort is Wong Kar Wai’s contribution starring Tony Leung as The Grandmaster.

I am of course talking about Yip Man (sometimes spelt Ip but I feel the Cantonese is closer to Yip with an initial Y) – the man who has gone down in history as one of the most skillful (and now very famous) proponents of Wing Chun kung fu. Aside from his obvious Bruce Lee connection – which arguably is behind the recent surge of interest in him – he produced a stable of highly proficient Wing Chun pugilists including the likes of Wong Shun Leung, Duncan Leung, Moy Yat, Leung Ting and many many more – Yip Man is really the centre point for the global expansion of Wing Chun, an expansion that really started with the kung fu craze that Lee kick started in 1973.

Despite all the legend that is being built up around him, largely thanks to the aforementioned films, we know that Yip was from Foshan and from a wealthy family. He was sent to HK for study in his teens (at St Stephen’s) before returning to Foshan to become a police officer and not returning to HK full time until 1949 when the Communists took over the Mainland. 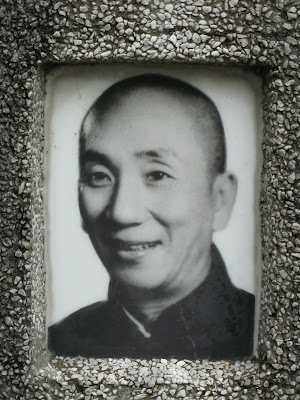 This photo is on Yip’s grave stone

The Yau Ma Tei location on Lei Tat Street no longer exists and became the victim of redevelopment many years ago. I don’t just mean the building, I mean the whole road has disappeared! The whole area, which became known as the 'six street slums' was completely razed and now houses the Prosperous Garden development (built in 1993). Actually, the Broadway Cinematique now sits on the approximate location of the street that used to house the Wing Chun school.

Yip Man did live to see the (local) success of his upstart student and was living on Tung Choi St before eventually passing away from throat cancer in December 1972 (some attribute it to his lifelong opium habit). Apparently Lee ruffled quite a few feathers when he failed to turn up for Yip’s funeral service.

Now of course, the Yip family name lives on in Hong Kong and the Wing Chun world thanks to his son Yip Chun – an ass-kicking octogenarian still actively teaching the art he learned from his father – but if you want to see anything Yip Man related you have to make a trip over to his hometown of Foshan and visit the Yip Man Tong – a museum dedicated to his memory.

However, for Foshan is not Yip’s final resting place and his grave is actually situated on a hillside behind Fung Ying Seen Koon temple in Fanling.

I had no real idea of where the grave was when I started out to find it on this day (back in Sep 2011) and in the end it took a while before I found the right path. . Luckily, despite pouring rain, hot steamy weather, mosquitoes and even going arse-over-tit on some slippery leaves (quite apt given that Yip means 'leaf') I finally managed to find the grave. 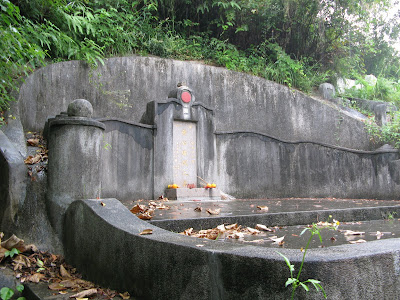 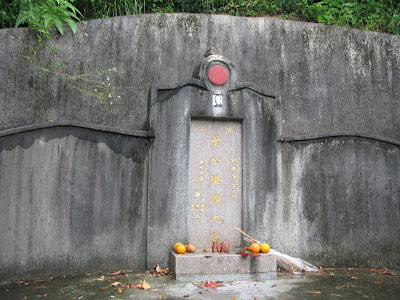 The grave, rather than being hidden from the public, is actually signposted in two places, you just have to be on the right path in order to find the sign posts :-)

What you need to do is head to Fanling and exit from the station (assuming you arrive by train) and head over towards the Fung Yin Seen Koon temple complex. Arriving at the main gate you need to bear left and follow the pathway around to the left hand side of the complex until you come to this gate way to “Tin Sam Tsuen”. 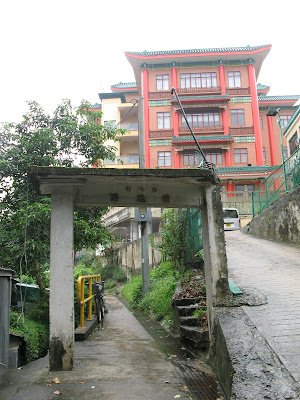 Basically, just keep following this path, it’s a no-brainer really. You’ll come to this next location after a couple of minutes. 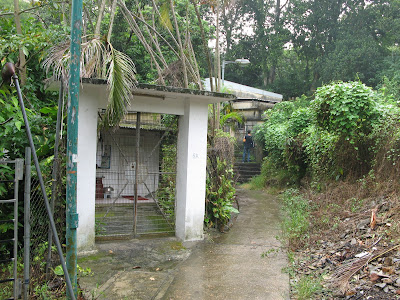 There is no other way to go other than to follow the path to the end where you come across some steps with yellow railings that go diagonally up to the right. 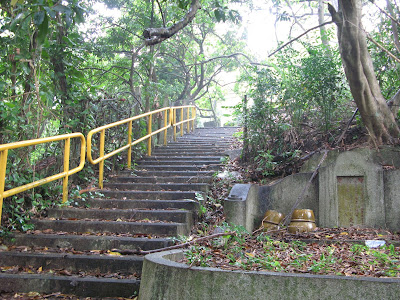 See those little brown pots on the lower right? Well, believe it or not they contain bones. When you’re Chinese and wealthy you get a proper burial (as opposed to being cremated and stored as ash in a columbarium) and after spending a few years in a coffin, you are taken out cleaned down to the bone and stuck in one of those ossuary pots. Some people also call them 'Golden Pagodas'.

At the top of those steps you get a lovely bamboo strewn pathway with quite a few graves at your feet. Keep heading straight on – you may even have to duck under the odd bit of fallen bamboo. 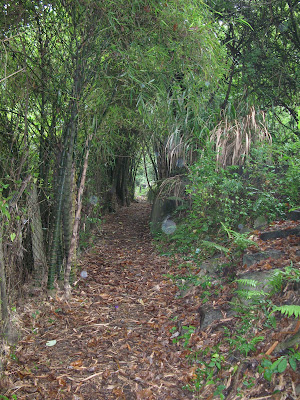 It’s along this part of the path that you will see a couple of signs pointing your way. 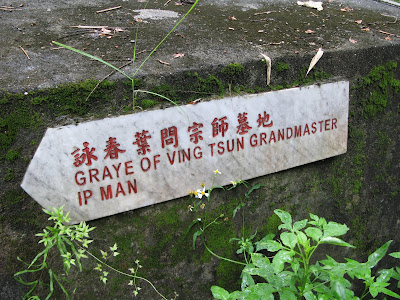 Yes, I know it says ‘GRAYE’ but this is a common type of mistake seen in Chinese signage. The engraver probably didn't read/write English well enough to know the difference between the letters and carved a Y instead. It’s a forgivable mistake, especially when I consider how good my Chinese writing skills are i.e. crap. I think they had a batch done because the next one is exactly the same. 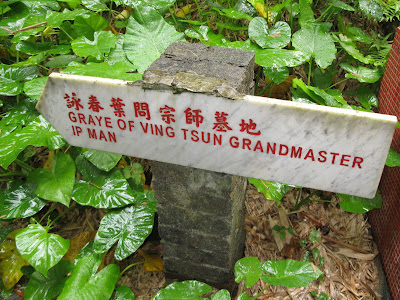 If you are interested in what the Chinese writing says, it is (reading L- R ): Wing Chun Yip Man Jun Si Mou Dei. So we know what Wing Chun and Yip Man are, but what about Jun Si Mou Dei. Well Jun Si is the Cantonese for someone of great learning who is revered. In fact my translator says “a master of great learning and integrity/man of letters worshiped by people”. Yes, I think that is a good description of Yip Man, don’t you? The final Mou Dei is the Cantonese for a graveyard or plot within a graveyard. Mou is a tomb/grave and Dei relates to the ground where it is. Anyway, Canto lesson over with so let’s move on.

You’ll soon come to a skinny looking set of steps that again lead of at an angle. Walk up them and after about a minute you’ll see this clearing on your right hand side. This is where you need to head to because the grave is just here (it’s the one above the white one you can see in the picture). 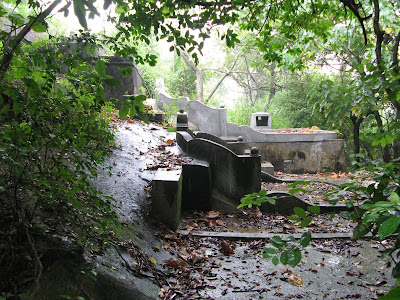 I'd say the grave gets frequent visitors because it's been really clear the two times I have visited. If it's not family members going up there then I am sure it may also be Wing Chun practritioners going to pay their respects or just curious people like myself who are interested or perhaps had their interests piqued by all this film shenanigans. Anyway, hope this helps. Happy hunting.
Posted by Phil at 23:56