Whether or not it remains for the use of the rail workers is not known (by me at least), but that's not really why I am talking about it. I'm interested in the place because it sits on the site of the former Tai Po Railway station.
In the days before electrification, Tai Po had two rail stops. Perhaps the more famous one, by virtue of the fact that it is now the rather small but excellent Tai Po Railway Museum, was called Tai Po Market station and served the centre of the new market area. Tai Po station on the other hand was on this site now occupied by Trackside villas in Tai Po Kau.

Perhaps the first thing I need to do is point out the distinction between Tai Po Market railway station and Tai Po railway station. The former exists in two forms: 1) as the current MTRC East Rail station that serves the south side of Tai Po, and 2) the old Chinese style station (built in 1913) that closed down when the line was electrified in 1983 and turned into the small, but very excellent, Railway Museum. Tai Po Station, on the other hand, is a former station about a mile south of the modern day Tai Po Market. An odd place to put a station in a modern day context and the current trains zip through the old site without giving it a second thought. There is nothing here now to suggest it used to be a station at all because when the line was upgraded (electrified) in 1983, the KCRC took the opportunity to consolidate some of the stations and one of the unfortunate victims was the stop at Tai Po Kau.

Anyway, the only thing we have left to remember the old station by are a few photos on the Govt website (see below), as well as some older maps and the odd bit of film footage. Here are some snaps from the Govt website (this link). 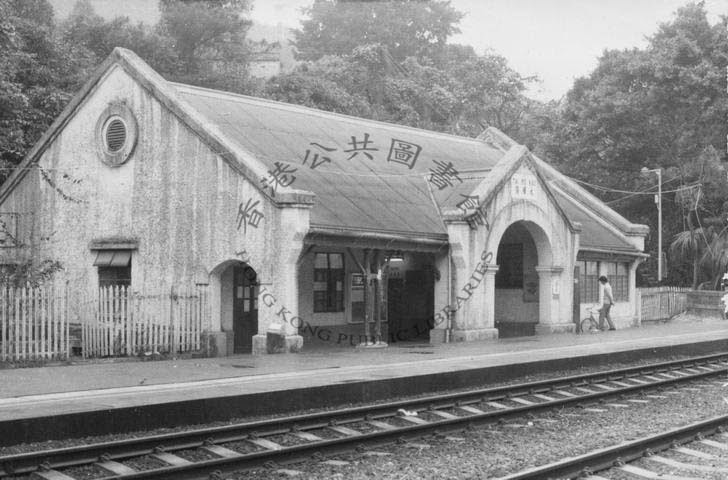 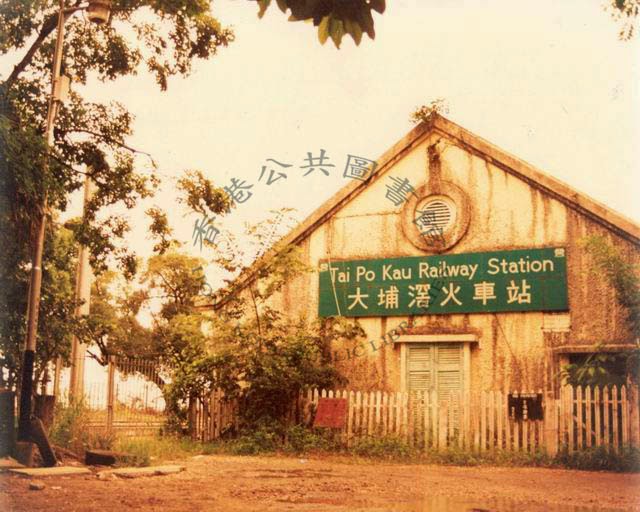 Notice that the latter photo shows the station name as Tai Po Kau station. This was a later change probably done so as not to confuse passengers about where to get off for Tai Po Market – just a guess of course but for a long time the station was known only as “Tai Po”.

So where exactly was the station located? Well, it’s location is now occupied by an apartment development (rather grotty by today’s standards) that houses workers for the MTRC company. The place can be reached via two ways – either via a subway from the Tai Po to Shatin Cycle track, or from a side road that leads down from the Tai Po section of the Tai Po Rd. 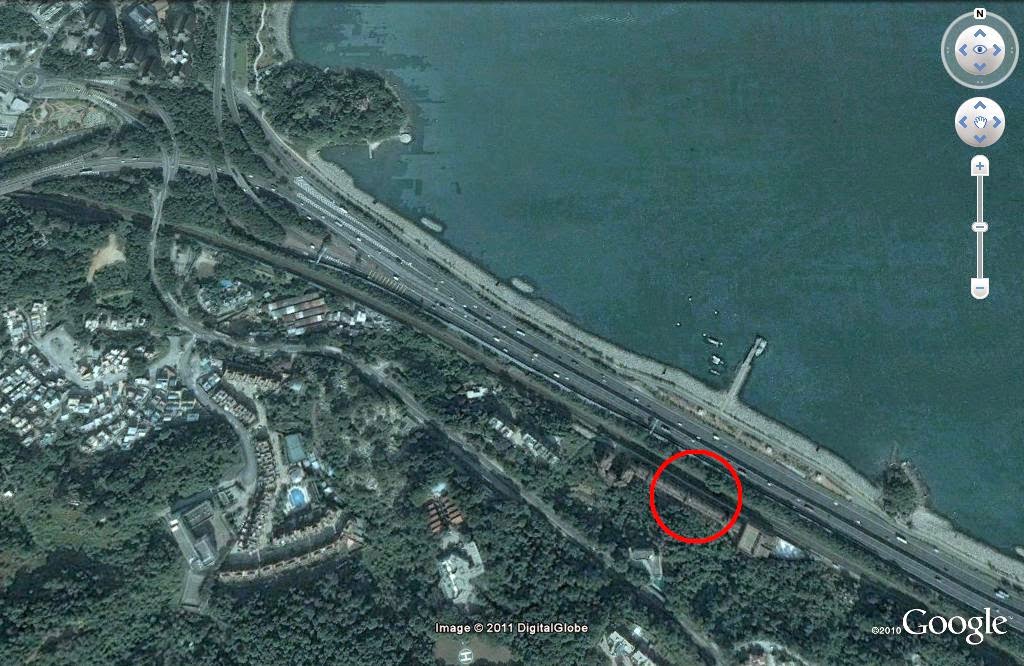 I’ve marked the old location on the GoogleEarth snap above, but note that from the cycle track side the subway is marked – importantly – by an old pier that sticks out into Tolo Harbour. I say importantly because the pier is really integral to the station’s own history. Before large scale development of Tai Po started in the 60′s and 70′s, this small part of the territory was a relatively buzzing hub of activity and the pier allowed villagers from all over the harbour area to travel to the station by boat before transferring to the train (and therefore onwards south to Kowloon or north to the border) at Tai Po station. The growth of Tai Po Market made the place redundant which is why it disappeared but the pier remains to this day and is still used on a daily basis by local fishermen, sightseers and general boat traffic in the harbour. 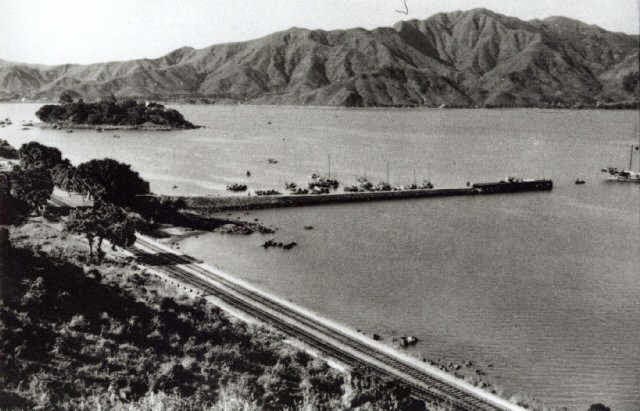 The above shot is from the Govt archive and shows the old pier with the track running alongside the water. Obviously these days reclamation has extended the land out into the harbour somewhat to make space for the Tolo Highway. The island in the background by the way is Yuen Chau Tsai (with Island House on it). Here is a quick shot of the pier - although occupying the same location, this one is a replacement. 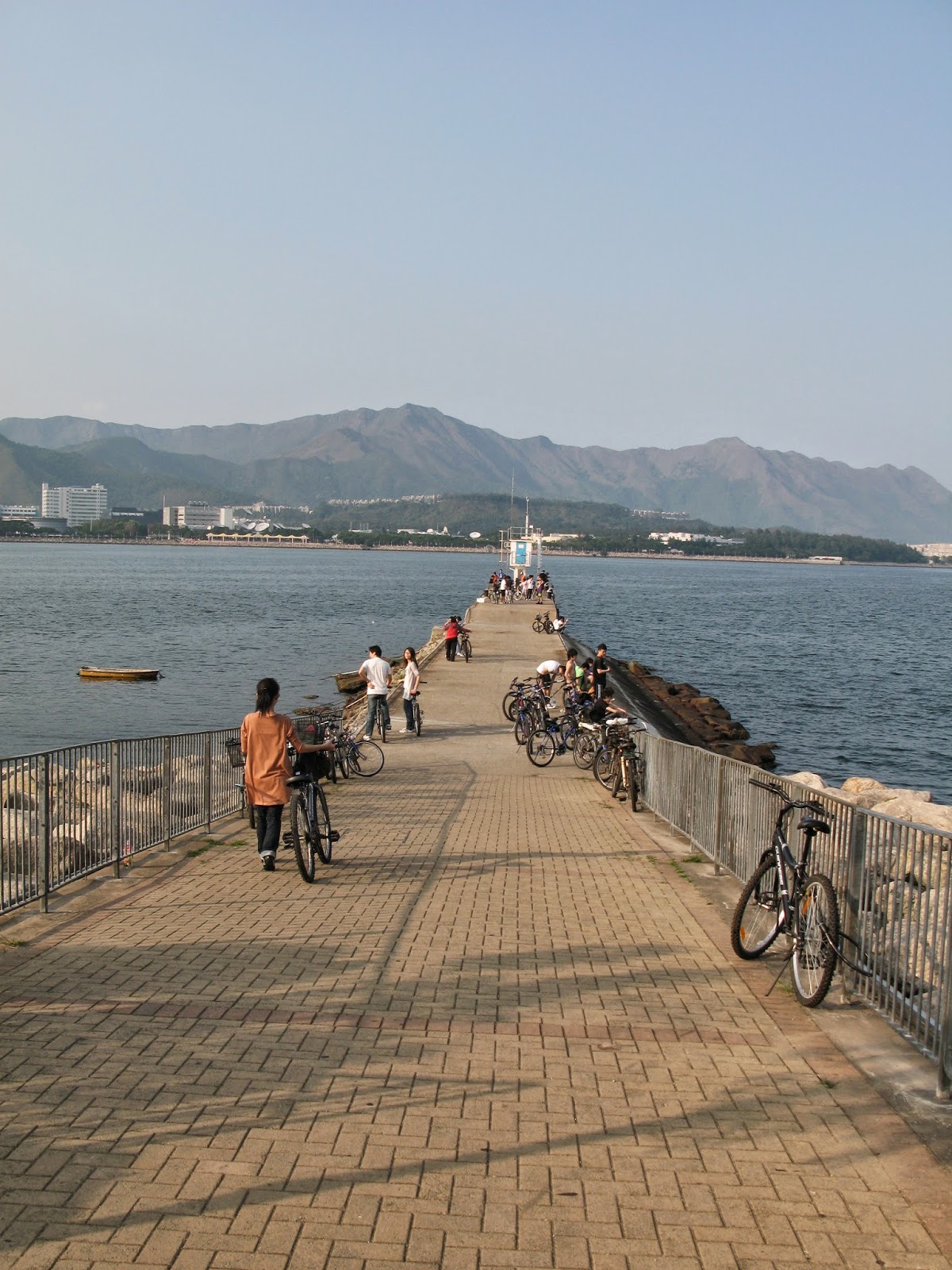 Anyway, what of film footage I mentioned? Well, if you go to the Railway Museum in Tai Po (and it is well worth a visit – except on Tuesday, when it’s closed) you will notice they have a small visual display in the centre of the old station building – outside the main display room (that used to be the first class waiting room). It loops through a few items, one is a short documentary on how they managed to get the diesel engine – the Sir Alexander – into the museum after its restoration. The second item is a collection of old B&W film clips – about 6 in total – that feature parts of the railway.

One day I decided to watch the clips and my attention was caught by one of the young actors who bore a striking resemblance to someone I was familiar with. It turns out I was watching a 13 year-old Bruce Lee starring in a film called An Orphan’s Tragedy (1955). The clip showed him getting on a train at Tai Po station ostensibly to go to Kowloon to start his schooling. The film also featured his character returning to the same station supposedly several years later as a successful pharmacist in the form of the much older Cheung Wood-yau. Anyway, the upshot is that these scenes were filmed at the then Tai Po station in Tai Po Kau and as a result we have the following screen grabs. 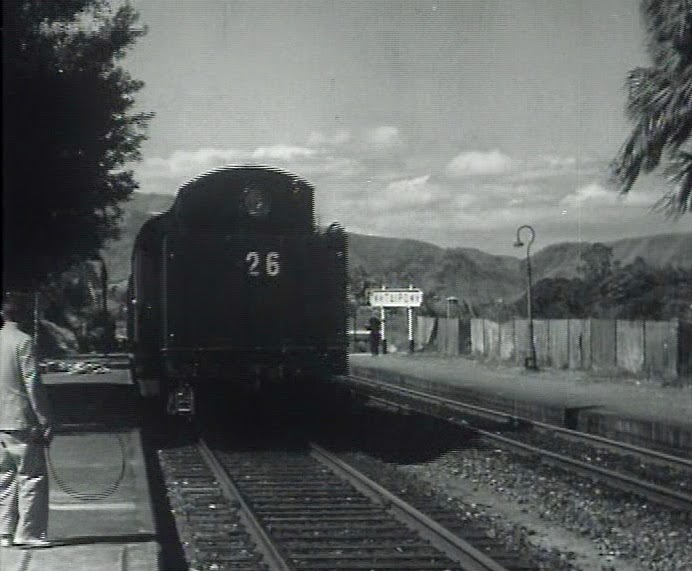 Check out the station name at the back: "Tai Po". This is the view looking north west up the line towards Tai Po town. The ridge-line to the right of the (very ornate) lamppost leads up to Cloudy Hill, and the ridge-line to the left (which is actually further away) is the line of hills that sit on the western side of Lam Kam Road in Lam Tsuen. Actually, I would love to find out what the KCR did with all those lampposts – if anyone has any info about them please feel free to comment.

Here is the view looking south-east, from the same film. 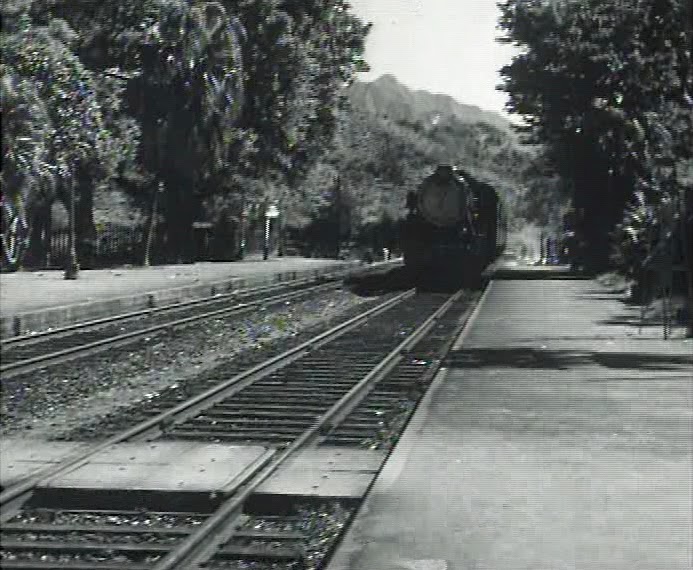 The hills in the background are actually part of Ma On Shan and the station was actually located off-camera on the right hand side. You get a brief glimpse of the columns at one point but it’s a fleeting glimpse so not worth getting a grab of. Not so long ago, I ventured through the subway from the cycle track (thanks to Pete Spurrier for making me aware of it) to the site of the old station. It must be one of the most underused subways in the whole of HK and is a bit spooky and, surprisingly, free of graffiti. 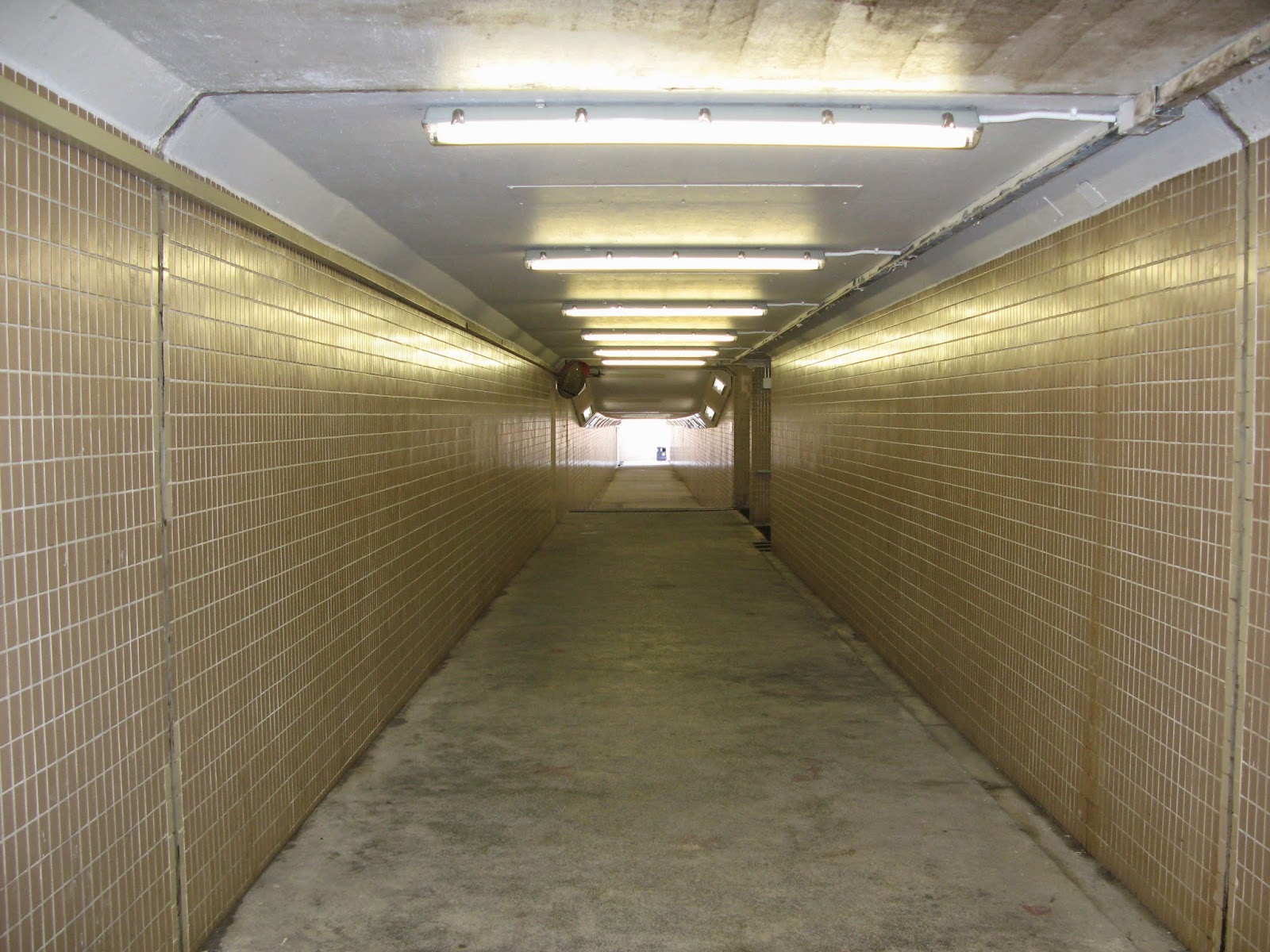 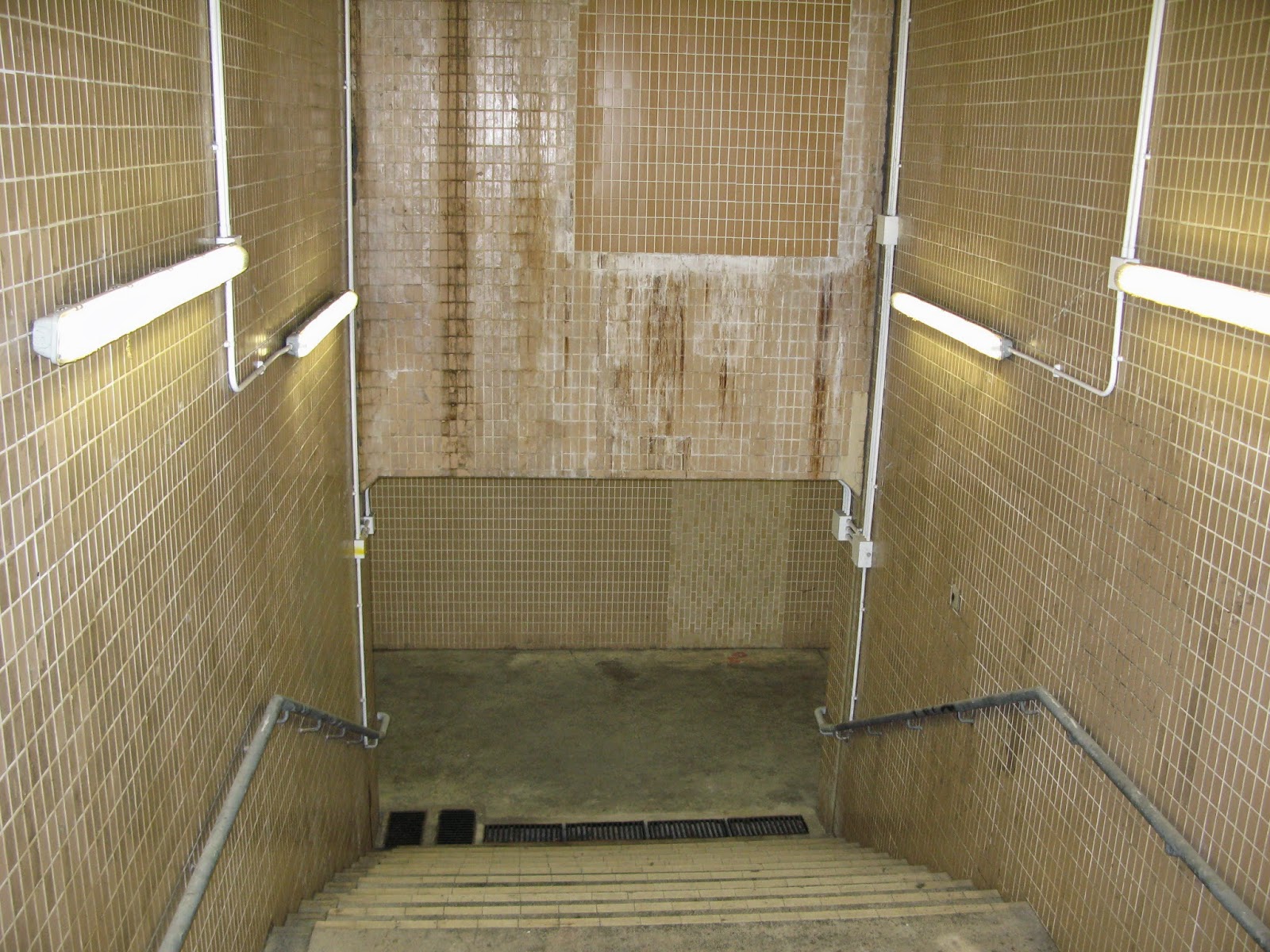 This subway takes you under both the Tolo Highway and the train track, but if you want to get to the track there is an exit part way along which takes you to the harbour-side of the track (between the track and the highway). It’s only from this location that you can actually see the track itself. 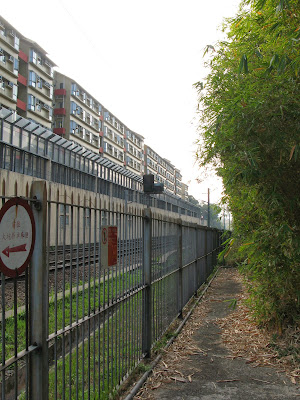 Trackside Villas on the opposite side 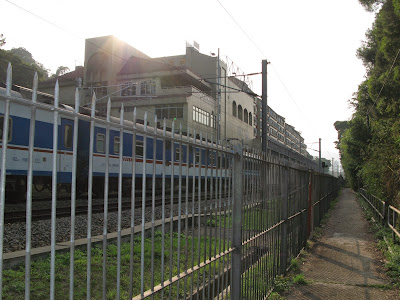 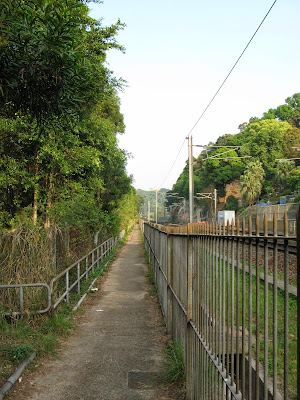 The view towards the south

The safety railings prevent you from doing anything too stupid too easily, but they are only a modern edition since electrification. When the line was still steam (and later diesel) driven, it was perfectly possible to walk down the tracks – and many people did – using them as a convenient way to get into Kowloon (certainly beats walking up and down all the hills).

Note the pathway. It's possible to walk all the way back to Kerry Lake Egret Park from here if you so wish. I did try to get some similar angles seen on the film grab above but unfortunately once you cross under the track and pop up on the other side, you are completely screened off from the track (probably to lessen the impact of the railway noise) as you can see below. 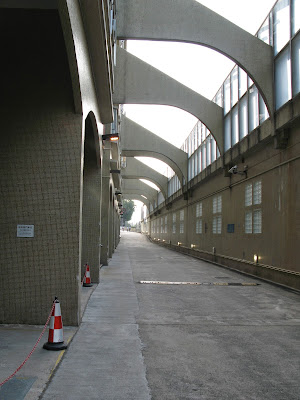 The track is on the right behind the sound barrier, no view at all!

This is the limit of the view though and it’s hard to see if there are any original features left in-situ by the track. I have noticed a small stone wall as I pass through on the train which looks as though it may be part of the original platform and I have seen the same wall on early photos. Sadly, there is no way to get a clear snap of it. Anyway, it’s a small glimpse into the history of the track.
Posted by Phil at 14:47