I was recently reminded of an old post I did a few years back concerning a commemorative stone tablet in Tai Po Kau Garden in Tsung Tsai Yuen (松仔園) - the main entrance point for Tai Po Kau Nature Reserve located along Tai Po Road. I did briefly touch on this topic again in a previous post (Walking along Tai Po Road – Taipo to Shatin Section) because it was on route, but I didn't go into too much detail because I did envisage re-posting the information at a later date. It seems that later date has arrived and I have since been able to add a few more pictures. A special thanks goes to the folks over on the Hong Kong in the '60s Facebook group who inadvertently reminded me and also provided some rather excellent further information including what appears to be this location's unofficial name: Mang Gwai Kiu ( 猛鬼橋), which in Cantonese which means "Ghost bridge". 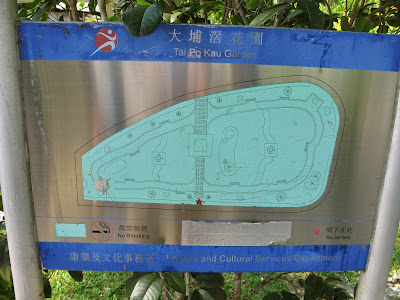 Tai Po Garden itself is nothing special. The area where it stands Tsung Tsai Yuen, has long been a local beauty spot (as we shall soon see) and it's popularity was perhaps enhanced by its location along Tai Po Road in the hills above Tolo Harbour affording it a rather spectacular view. These days the logistical importance and usage of Tai Po Road (it was once the only road into this part of the territory) has waned somewhat but the place remains popular because of the entrance to the nature reserve. As a result, the L.C.S.D has put some effort into beautifying the surrounding area and keeps the garden in a pretty good condition. It has a small pavilion and benches and an array of vegetation around the border. In all a rather pleasant little spot. However, over in one of the corners (see top right of the map above and picture below) is a rather strange looking stone tablet covered in red Chinese script. 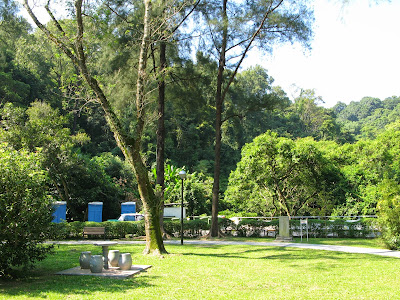 Being tucked away in the corner it makes me wonder how many people actually notice the thing, which is a shame because the story it tells is a fairly tragic one and is the reason for the rather sinister nickname of this location. Let's take a closer look. 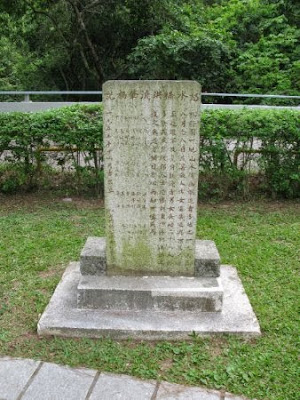 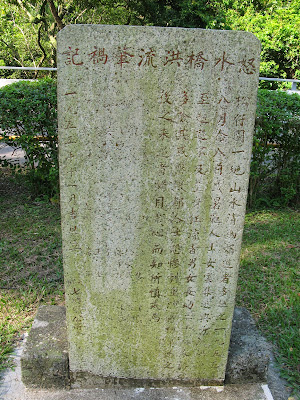 It may not be too obvious, but these two picture were taken a couple of years apart so despite the lower one being closer, the writing has worn out a little bit. Never mind, because I can tell you what the writing says anyway. The larger size inscription at the top says 怒水橋洪流肇禍記 (reading right to left) and roughly translates as "Angry Torrent of Water, Bridge Accident Remembered"!

Actually, even the above closeup is difficult to read, but for my Chinese-literate readers, the full transcript in Chinese is posted below:

If you are wondering why I have put some characters in bold, it's because these are actually people's names and I've translated them as best as I can below because I think these are names worth hearing about.

This part of the Tai Po Road is actually built on a bridge and a mountain stream (which comes down from the nature reserve and empties into the water in front of what is now Kerry Lake Egret Park) passes under the road at this point.

On the 8th 28th (see gweilo8888's comment below) August 1955, a large group of local teachers and their students stopped off at this point of the road and settled down for a picnic. Anyone who has spent a summer in Hong Kong will be able to recall at least two things: first, that it gets very very hot, and second, that sometimes the rain just comes down in huge downpours. In typical Hong Kong summer weather style, the school group all of a sudden found themselves getting drenched as the skies opened and the rain poured down. At the time Tsung Tsai Yuen had no shelter (unlike the modern pavilion that now stands in the garden) so the group decided to take shelter under the nearby bridge. As the rain fell, it started to pool further up the hillside due to the waterway being blocked in some way. The water eventually burst free and poured down the hillside in a huge torrent, hitting the bridge and washing everyone down the hillside into the bay. Twenty eight people, adults and children alike, were killed in one big sweep. It's not clear if they died by being hit by the force of the water or they just drowned as they were washed down the hillside into the sea and, in fact, not all of the bodies were recovered. 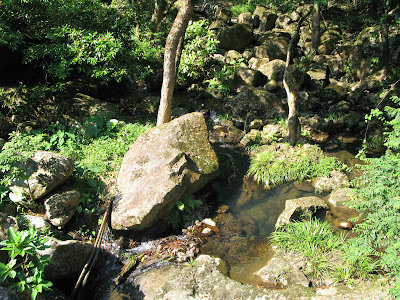 The stream bed that runs under Tsung Tsai Yuen 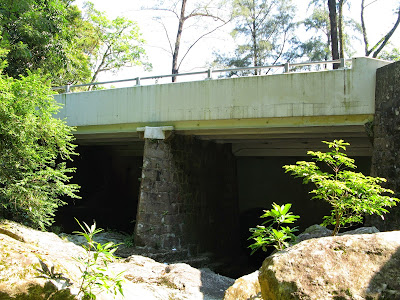 Current bridge and culverts - redeveloped since 1955 though...

It sounds unbelievable that something like this could happen, but having experienced quite a few summer storms myself, I can certainly vouch for the potential power HK's wet summer flash floods. One example I can remember not too long ago was during a massive storm in June 2008 when - in Tai Po - a poor girl was washed away down the Lam Tsuen river and killed after being hit by a surge of water as she crossed!

So there you have it, a very sad story and one that certainly deserves some remembrance. However, with the memorial also comes a stern warning as you shall now read in Bunce's (in his own humble words: 'rough') translation below:

The picturesque scenery of Tsung Tsai Yuen attracts many visitors. On 28 August 1955, a day of intense heat, a sudden torrent washed away and buried 28 men, women and children just as their excitement at visiting the area reached its height. Is it really true that our favourite places are filled with danger?

This tablet is erected to alert future visitors so that they, armed with this knowledge, can take the necessary precautions to avert a similar disaster.

[Names of the perished - see below]

A sad story indeed. Anyway, here is my best attempt at putting the victims names into some sort of acceptable standard HK-style English name format - if there are any Chinese readers who would like to offer corrections please feel free.