I first found out about Tao Fung Shan from one of the monthly newsletters published by the RASHK (Royal Asiatic Society of Hong Kong) newsletters. Sadly, I can't remember the year or month but the article covered the various buildings in HK constructed in the style of what has become known as Chinese Renaissance. What this seems to mean is western structural architecture/construction techniques with a Chinese aesthetic such as ornate columns, archways or roof styles that are often found on local temples and the like. Hong Kong has some great examples in the form of King Yin Lei, the Aberdeen Seminary, the now demolished Ho Tung Gardens and several more. This style of architecture is quite rare now, certainly many buildings with these characteristics have gone a long time ago making the remaining ones that little bit more special.

In the case of many of these buildings the style was simply for show, but in the case of Tao Fung Shan it functioned as a way to attract local Chinese to the property, under the mistaken impression they were entering a temple or monastery, and then try to convert them to Christianity. It all sounds a bit nefarious but I suppose the Chinese style of building just made the place less intimidating to those who were curious about Christianity. 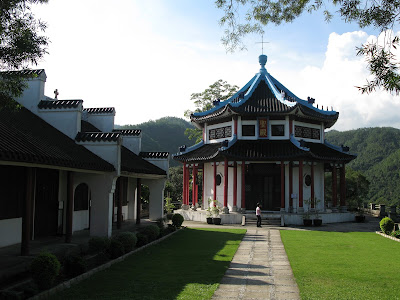 The Tao Fung Shan Christian Centre sits on top of a hill (Tao Fung Shan is actually the name of the hill) next to Shatin MTRC station. Despite its seemingly close proximity, the way up is a little more hard work involving either a cab which will have to drive via Tai Wai, or a fairly long (20 minutes) uphill walk through Pai Tau village. You can actually see the Centre's large hilltop white cross from several vantage places in Shatin because it pretty much overlooks the train station. 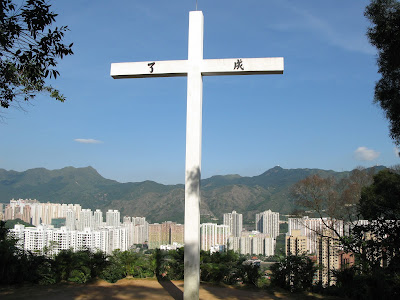 The cross can be seen from several parts of Shatin

Unlike other Chinese Renaissance structures, Tao Fung Shan isn’t just a single building but is rather a complex encompassing living quarters, prayer rooms, study rooms and administrative offices. It even used to have a rather well-known hostel that had to close due to lack of funds. It was established back in 1930 by a Norwegian missionary called Karl Ludvig Reichelt. He'd already established Christian missionary work in the mainland before moving to HK and settling on Shatin as the location for his next project. The complex was designed by a Danish architect called Johannes Prip-Moller. 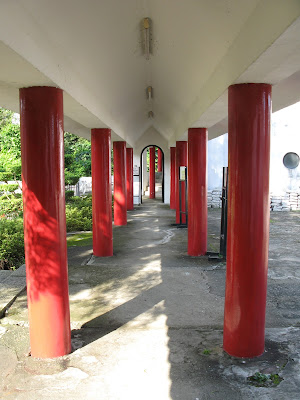 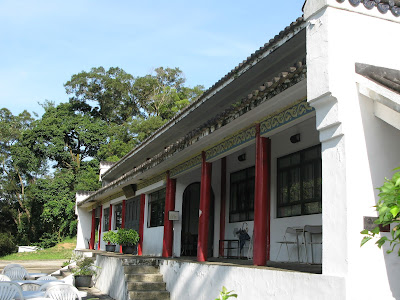 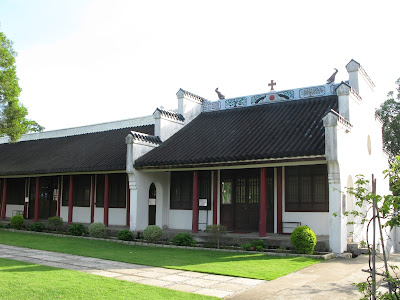 Being in the wild hills of the New Territories it's not surprising to learn (and I was told this by Dr Patrick Hase, a noted local historian who was once the Shatin District Officer - so he should know, right?) that Tao Fung Shan is the location of the very last reported wild tiger sighting in Hong Kong. Sometime during 1951, Reichelt was supposedly tending to somethings one day and happened to look out of his window and saw a large tiger prowling around his vegetable patch. He went to tell someone, but when he returned to the window the tiger had disappeared. I also had this semi-confirmed by someone on Facebook who used to live here in the 1950's...semi-confirmed in that she had a vague recollection (she was a child at the time) but couldn't recall the details. But anyway, I shall leave it out there for anyone who is interested in that sort of thing. 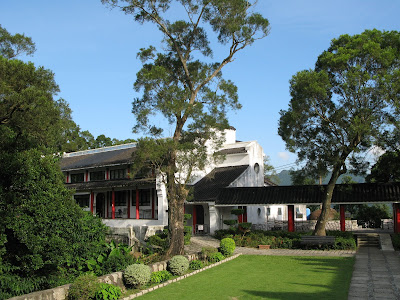 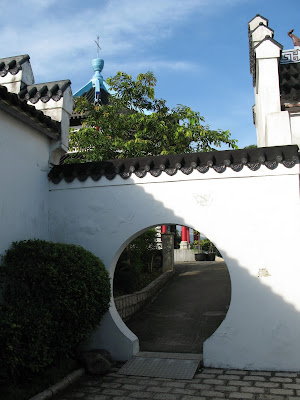 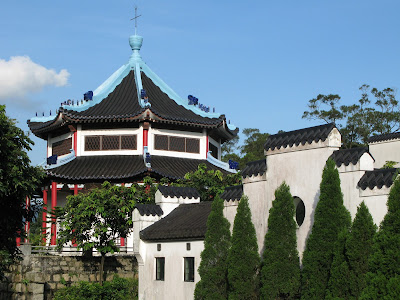 Actually, since visiting this place back in 2009 - quite sometime now, I guess - I have since discovered it has been used a couple of times by film crews. Notably it stood in for Beijing in Pierce Brosnan's Noble House mini-series, and in the slightly more recent Dragon: The Bruce Lee Story it was used as a film studio. The latter is quite apt considering we know that Bruce Lee himself used to come up to Tao Fung Shan to collect fighting spiders (as told to Chaplin Chang and Robert Clouse by Robert Chan). 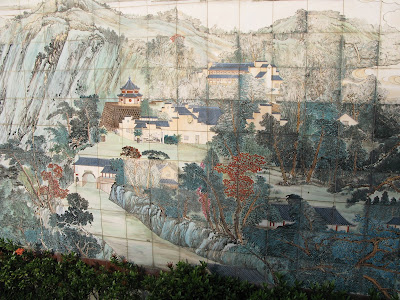 A wall frieze inside the complex 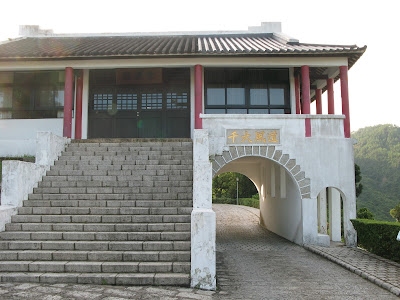 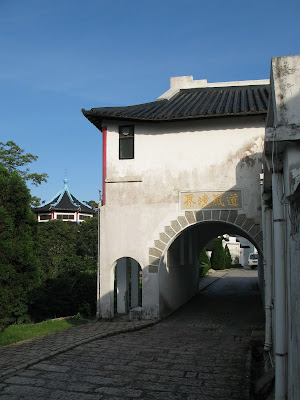 Both sides of the main entrance 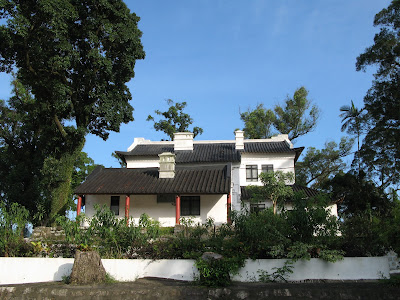 It is open to visitors between 9 -5 and even has a gift shop selling an assortment of stuff. I’m a big fan of this type of architecture and so just gawping at the buildings is enough to keep me happy, however, walk along a small path to the front of the hillside and you will arrive at a small clearing, fronted by a small gateway with Chinese writing either side. The front of the clearing overlooks Shatin valley and is the site which holds the aforementioned large cross (it's 12 metres high!). It's a fairly peaceful place and is conducive to just sitting down and watching the world go by below you. There’s a small pavilion which was occupied by a young chap strumming his guitar when we were there (no, he wasn’t singing kumbaya) and bizarrely enough a small replica of Mong Fu Shek (Amah Rock). I have no idea what the latter was doing there but someone obviously took the time and effort to make it for some reason. 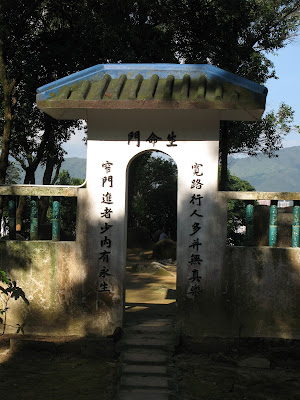 Gateway to the hilltop clearing and cross 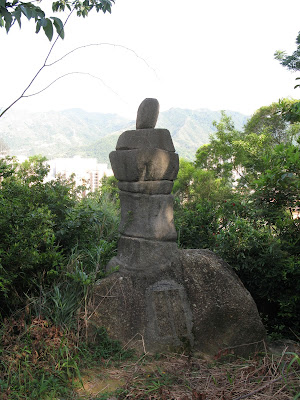