On top of Tai Mo Shan

Tai Mo Shan is Hong Kong's tallest peak and in the 10 years I have lived here, I had never been to the top. I've been nearby for some interesting dim sum breakfast at Chuen Lung village, and also a few months ago I walked (with my kids) down the Kap Lung Ancient Trail and back up the Kap Lung Forest Trail, but had yet to make it to the top. So when David Bellis from Gwulo suggested a trip there to find some traces of the Japanese occupation I thought it might be a good opportunity. So, last Tuesday in the glorious heat and sunshine of Hong Kong's (unexpectedly) mild winter, we headed up there with Thomas Ngan (the same Thomas who is rather helpful identifying various film locations over on the other blog). 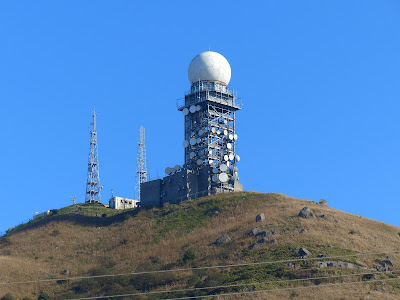 Radio transmitter at the top of Tai Mo Shan

I won't give you a detailed account of our hike (it started at the Tai Mo Shan lookout and ended along the Lam Kam Road in Lam Tsuen after descending via the Ng Tung Chai waterfalls) but thought there might be some people interested in the views, the nice weather and the winter covering of air pollution.

We were keen to shave a bit of time off the beginning of our trip by catching a taxi from Tsuen Wan West rail station (exit D for the taxi rank - cost around $80) to the upper car park next to the Tai Mo Shan lookout. If you have more time then it is easy to catch the #51 bus and ride to stop #12 (named "Country park") and walk back down to the entrance to the park at the bottom of Tai Mo Shan Road.

The view from the Tai Mo Shan Lookout is quite spectacular (in all honesty, the views are spectacular everywhere). The first picture below is looking north towards Kwun Yam Shan - that's the pointy hill in the centre. If you read my film locations blog then the view might be familiar, it's a similar angle anyway if not exact. The dip between Kwun Yam Shan and the next ridge line is the Lam Tsuen valley and beyond that into the haze is Fanling/Sheung Shui and Mainland China. 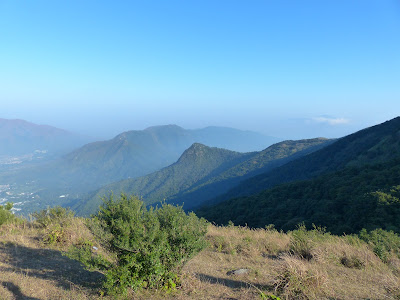 Picture number two below, from the same vantage point, shows the view to the north west. On the far left is the runway at Sek Kong but just to its right is some of the construction work for the new high speed rail link to Guangzhou. The flat land around it is Pat Heung. 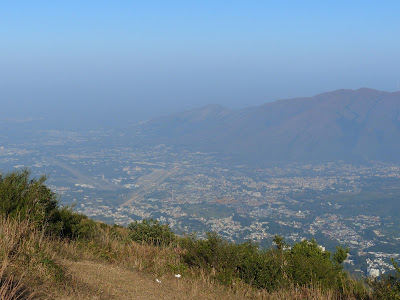 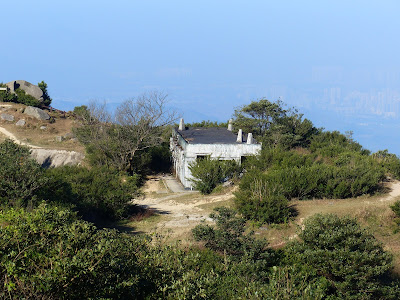 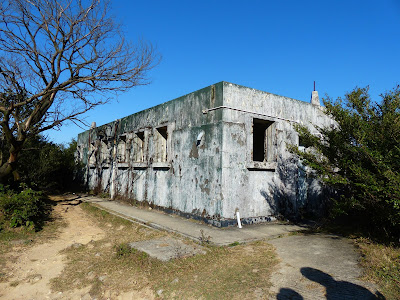 The structure you can see above occupies the lower section of the lookout and was probably military given the mountain's strategic position and height. In fact the only reason getting here is so easy now is because of the former military-built roads that are still around such as Route Twisk and Tai Mo Shan Road. During the Japanese occupation, the Japanese military built a radar station up here and dug out a significant number of anti aircraft battery sites that can still be discerned in amongst the foliage. But first you have to wander off the road a little. 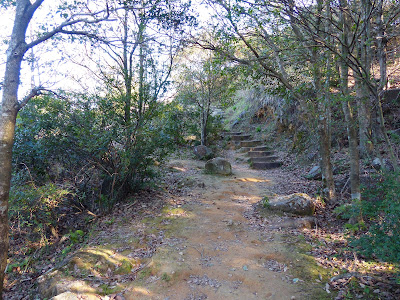 The bushes were buzzing at this time of years with thousands of bees. It was a bit disconcerting walking through them thinking we were walking into a bees nest only to see that the bees were just interested in the yellow flowers on the bushes. If anyone knows what the plant is then it would be interesting to find out. 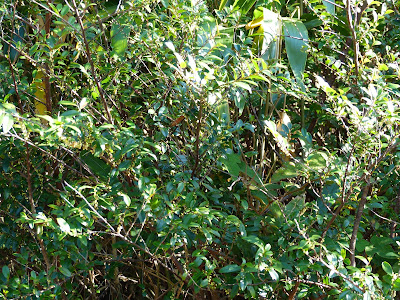 No matter how far you wander away from the main road (there are small trails leading off all over the place) the radar station on top of the hill is always in view and looking in any other direction gave some really stunning views. In the case of the lower photo below this was looking south east and if you look carefully you can make out the silhouette of Lion Rock through the haze (hint: centre left). 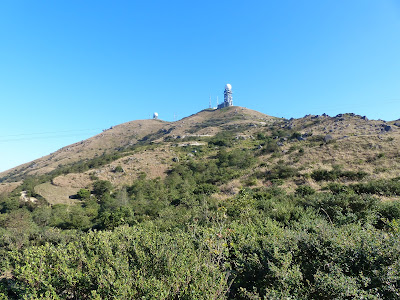 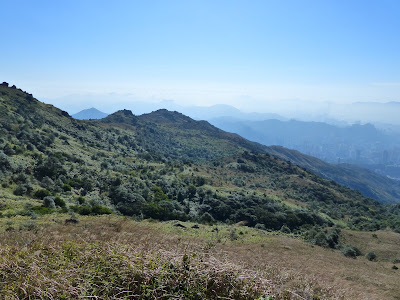 The old Japanese battery sites are hidden in the undergrowth but actually fairly easy to spot. Much like in the old trenches we found at Ki Lun Shan, the dug-out ground here has acted like a catch water and often the plant growth inside outstrips the surrounding hillside in density and colour. Of course there are also the more obvious signs such as a berm at one side where a hillock has been used for natural protection. The pictures below actually show the same bunker. The berm is around 2 metres in height and as you can see from the lower picture provided a lot of cover from anyone looking over from the Tsuen Wan area. The whole area around the top of the mountain is covered in similar dug out defences and I believe they were used for AA guns. Some of the dug outs were bigger, some smaller, and one looks to have been used to house a generator. 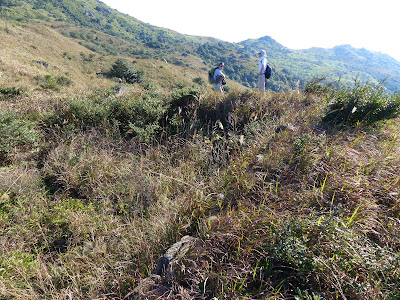 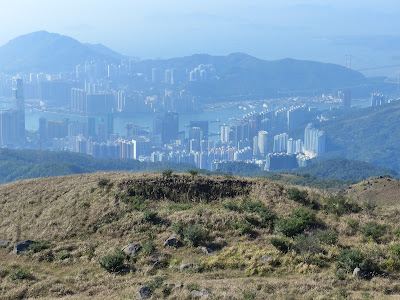 If you get bored of looking out for old Japanese AA installations, then you can just shift your focus a bit further and see some familiar sights way down below. Such as the two temple complexes below.
The one on the left is Western Monastery (西方寺) with its tall pagoda and just to the right you can see the smaller squat pagoda and concrete pai fong (ornamental gate) of the Yuen Yuen Institute (圓玄學院). I did visit both these places during a trip a few years ago and I think it might be a good time to reinstate that post (it was on my old blog and has yet to be ported over to here). 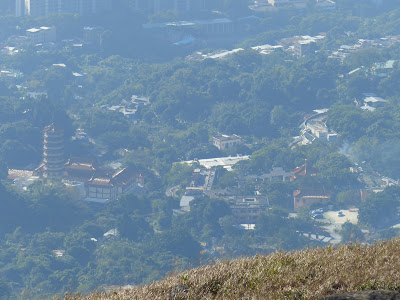 A little over to the west and you can see Tsuen Wan town proper with the 'beard trimmer' shape of Nina Tower. Named after Nina Wang who controlled the Chinachem company until her death a few years ago. 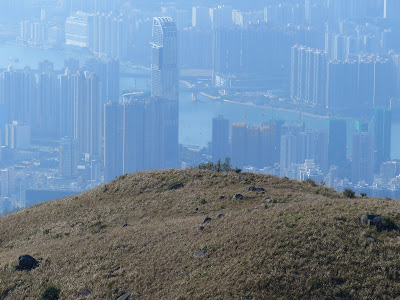 Nina Tower and Tsuen Wan beyond the hill

Looking further to the north and you can make out the 'saddle' shape of Ma On Shan in the far distance. The next closest ridge line is the one that leads from Needle Hill to Grassy Hill (Grassy Hill is the highest bit on the left) which will be familiar to anyone who has walked Stage 7 of the Maclehose Trail. Look closely and you can see the trail itself as it comes down the side of Grassy Hill towards Leadmine Pass hidden in the dip. 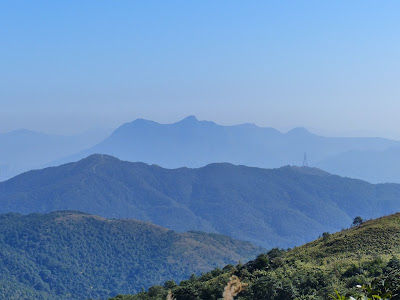 The picture below shows another one of the Japanese bunkers but with the hazy image of Hong Kong Island's ridge line in the distance. The buildings that can be vaguely discerned on the right are the cluster of tall buildings at the tip of the West Kowloon reclamation including the ICC (far right). 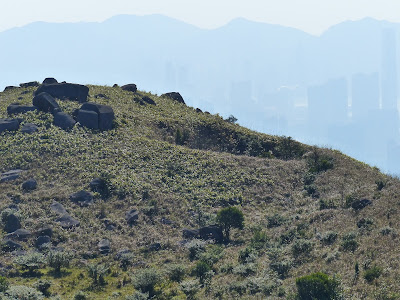 After stumbling around in the wilderness for a couple of hours and finding all sorts of relics from the Japanese occupation, we headed back up to the road (Tai Mo Shan Road) and decided to follow it up to the summit and over to the north side of the mountain in order to head towards Tai Po. As you can see the road is (necessarily) windy. This section is off limits to private cars and is used as a service road for the various interested parties who need to come up here such as the AFCD (who look after the country park), the Observatory (they have radar and weather instrumentation here) and of course the PLA who have a communication station here. It's no problem for hikers though and indeed the Maclehose Trail incorporates this road into its route. 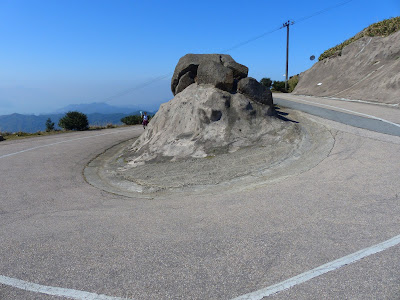 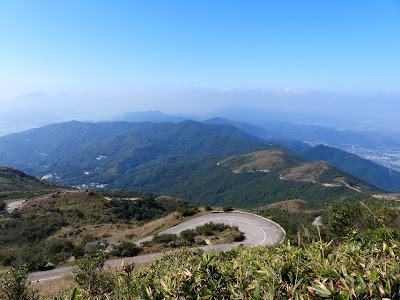 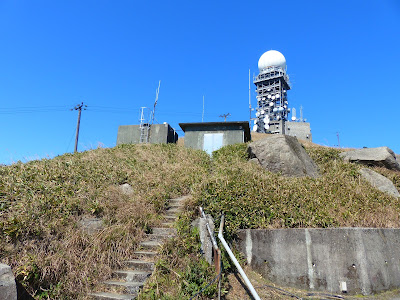 Sadly, actually reaching the summit is out of the question due to the aforementioned installations and this last photo above is not far from the top. Not being at the summit doesn't stop you from taking in the awesome scenery though. 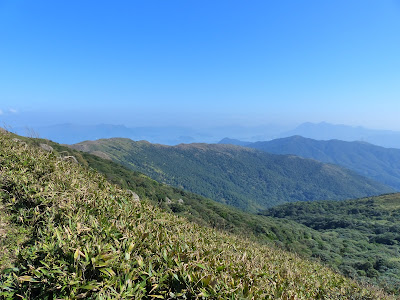 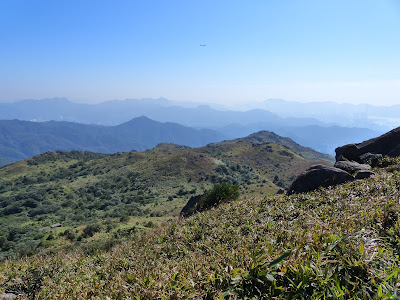 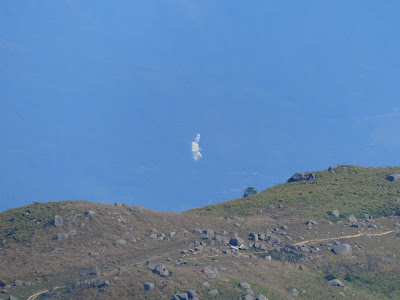 Pulling back from that close up the the Kwun Yam Statue at the Tsz Shan Monastery in Tai Po and you get the view below. Tai Po town is the cluster of white buildings on the left centre. But on the near slopes by the trail are what looks to be some old terraces that can still be seen. 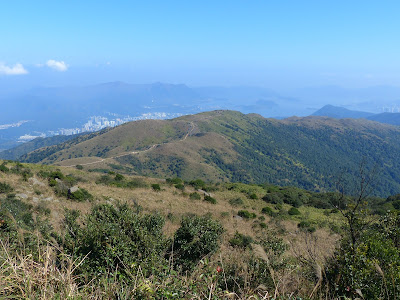 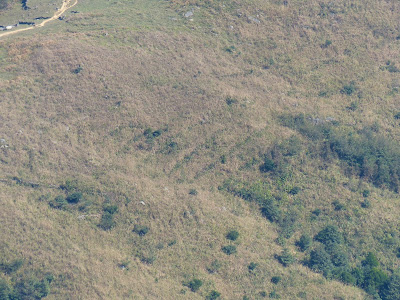 I believe that these were once terraces for a small tea plantation that flourished for a time. The terraces are largely over grown now but we did notice that a few on the other side of the hill are being tended to once again but we didn't get close enough to be able to see what was being grown, although I understand that there are still tea plants here growing wild. It's quite easy to follow the road down here. 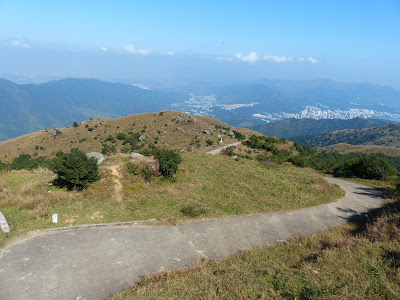 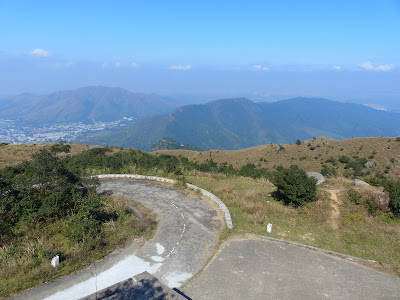 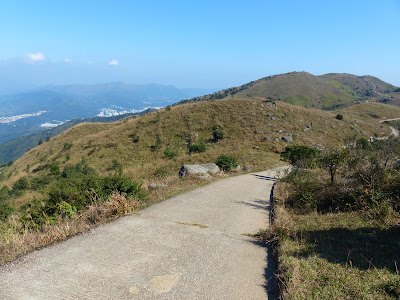 But it does eventually come to an abrupt end and just suddenly turns into a dirt track. It's at this point that you can continue along the trail and head towards Leadmine Pass or you can turn off towards the Ng Tung Chai waterfall trail and head down into the relatively cooler and shaded part of the lower slopes. The turn off is easy to spot because it's marked by a wooden shelter, although I'm not sure how permanent the cows are. 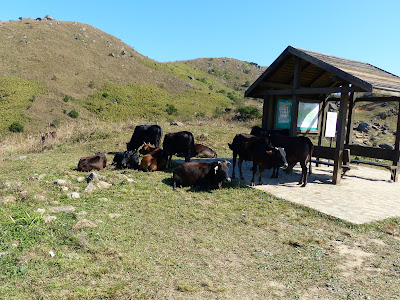 We were wondering if it was possible to access the Kadoorie farm complex from this trail. It is certainly marked on maps as though you can and you can even see the top part of the farm on Kwun Yam Shan from the trail (see below), but alas, they are obviously fed up with freeloaders using the trails as a free entry into the farm and have posted warning signs forbidding it upon pain of death (or perhaps something lesser), so we decided instead to just head down and see the waterfalls at Ng Tung Chai. But I'll save those for another post. 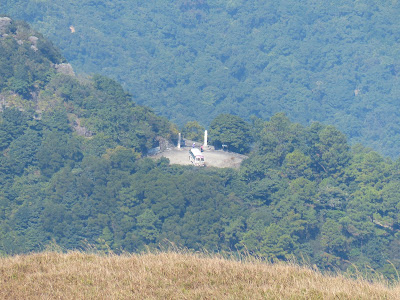 Dropping off point for the Kadoorie shuttle bus
Posted by Phil at 23:51