I spent some time this week wandering around the Cattle Depot Artists Village. Although being used as a sort of artist collective since 2001 it only received a Grade 2 listing in 2009. The site, originally built as an abattoir, was constructed circa 1908 to replace the Hung Hom slaughter house that was demolished to make way for the newly built KCR railtrack.

It operated as an abattoir until around 1969 when slaughtering duties were transferred to a new site in Cheung Sha Wan and the site was kept as a quarantine depot for various livestock including cattle, pigs and sheep. It remained in use until 1999 and anyone who was in Hong Kong in the 1990s may remember the livestock trains that used to roll down the East Rail (then KCR) rail line. I can always remember my first experience standing on the platform at Tai Po and saw everyone take a step or two back from the edge. I had no idea what was going on until the train rolled by and I was hit in the face with the smell of the pigs in the back. 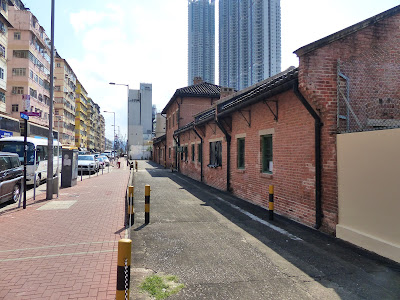 Wader Studios Then and Now

If you read my film locations blog, then you may be aware that not so long ago I was researching the locations for a Thai movie, Aorm Aok Jao Praya (Thai: อ้อมอกเจ้าพระยา), when I realised that one of the locations seen on the film,Wader Studios, was the very same place where Bruce Lee had been photographed during some HK-based filming for The Big Boss (examples can be found here, here and here). It had been bugging me for several years and all of a sudden I had the answer thanks to some scenes for a Thai film shot in HK. In a sort of weird reverse coincidence, The Big Boss was a HK movie shot in Thailand.

Anyway, with that mystery solved one of my overseas Bruce Lee friends was quite keen to visit the site (or at least what is left of it) to see where those photos of Bruce had been taken. Well, sadly there is actually nothing left of the old studios, but at least we can stitch together some screen grabs and see the rough area. The following panorama (supplied by AP in the UK, thanks AP) is a stitch of several screen captures from Aorm Aok Jao Praya. The taxi car is driving up Castle Peak Road, and turns right towards the main gate of Wader Studios. The main studio office is the one you can see with red dashes of colour in the background. 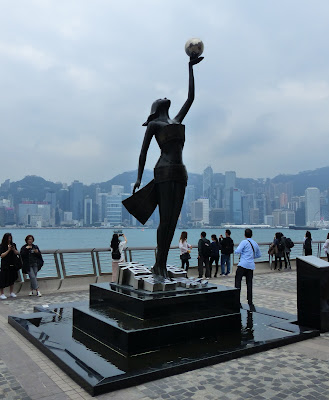