Wader Studios Then and Now

If you read my film locations blog, then you may be aware that not so long ago I was researching the locations for a Thai movie, Aorm Aok Jao Praya (Thai: อ้อมอกเจ้าพระยา), when I realised that one of the locations seen on the film,Wader Studios, was the very same place where Bruce Lee had been photographed during some HK-based filming for The Big Boss (examples can be found here, here and here). It had been bugging me for several years and all of a sudden I had the answer thanks to some scenes for a Thai film shot in HK. In a sort of weird reverse coincidence, The Big Boss was a HK movie shot in Thailand.

Anyway, with that mystery solved one of my overseas Bruce Lee friends was quite keen to visit the site (or at least what is left of it) to see where those photos of Bruce had been taken. Well, sadly there is actually nothing left of the old studios, but at least we can stitch together some screen grabs and see the rough area. The following panorama (supplied by AP in the UK, thanks AP) is a stitch of several screen captures from Aorm Aok Jao Praya. The taxi car is driving up Castle Peak Road, and turns right towards the main gate of Wader Studios. The main studio office is the one you can see with red dashes of colour in the background.

This film was shot in 1972 and the studio closed the following year. The land on which the lot stood was sold for redevelopment and in its place there are now three large blocks that make up the Wah Tat Industrial Centre (華達工業中心). The name of the current industrial centre is a nod to the name of the old studios. Anyway, here is what the same angle looks like today. Two of the Wah Tat's blocks front onto the road and can be seen far left and centre image. They're the ones with the red squares on the corners (perhaps this is another nod to the old studio colour scheme?).

The change doesn't just end there because a closer inspection of the front of the buildings reveals that the plot of land the studios used to occupy was completely excavated out so that the new industrial buildings had a few extra storeys below ground level. You can see the extent of the excavation in the image below. The old Wader Studios building would actually have sat in this gap with the ground level being level with the top of the distant stairs. 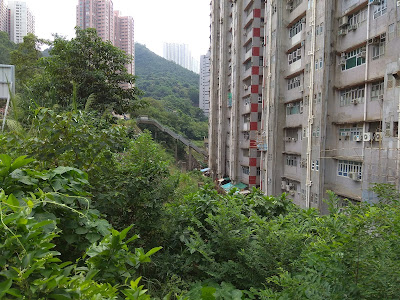