The Avenue of Stars: A Guide For The HK Film Ignoramus Part 4

The time is right to round off our little educational trip into HK film land and bring the Ignoramuses guide to a close. I feel enlightened after this brief trip through and what started off as a bit of a slagging - because let’s face it, the AoS deserves to be slagged off a little bit - has managed to make me aware of some lesser aspects of the HK film industry. It's just a shame that the path to greater knowledge is littered with bent over tourists huddled on the ground, badly spelt information boards, gaudy plastic molded effigies and tinny 'muzak' being played over and over again on the sound system.

Anyway, the show must go on and so here is the last installment. To catch up on the other articles, please feel free to find them here: Part 1, Part 2 and Part 3. Once again, photos are all courtesy of Thomas Podvin’s HKCinemagic website unless otherwise stated.

Whether or not it remains for the use of the rail workers is not known (by me at least), but that's not really why I am talking about it. I'm interested in the place because it sits on the site of the former Tai Po Railway station.
Read more »
Posted by Phil at 14:47 5 comments:

The Avenue of Stars: A Guide For The HK Film Ignoramus Part 3

In case you hadn’t had enough of my verbal diarrhoea and tenuous grasp of HK film and the significance of some of these people (although believe me, I have learned a hell of a lot about it and them since I started doing this particular project – so mission accomplished for me at least), here is part 3.

If you are a late arrival (shame on you, where have you been?) here are the links to Part 1 and Part 2. Once again, all photos are courtesy of Thomas at HKCinemagic.com unless noted otherwise.

This section sees some stars that I have actually heard of! I say I'm an ignoramus (which I am in the general scheme of HK cinema taken as a whole) but I do have a little bit of knowledge of many of the following people simply by virtue of being prominent in the industry when my early childhood interest was piqued. Yes, my interest was strictly limited to films of the action/kungfu genre, but seeing as this was one of the primary outputs of the HK film industry during the 70's, 80's and 90's it’s not surprising I can profess a little less ignorance – but only just. Anyway, let’s get cracking with…

An Article for HK Time Out: Chasing Down The Dragon

Back in March 2011, I had the good fortune to be asked to pen a short article for Time Out HK magazine. The topic, as you may have guessed already, was the various locations used in Enter The Dragon for which my blog had already established itself as a useful online source of info. Anyway, once again for those who missed it and because my stuff never seems to make the cut for the online version, I have attached a scanned version and with Time Out’s permission, you can view it here for yourself.
Read more »
Posted by Phil at 19:48 No comments:

Here’s a good example of how you should never take HK’s landscape for granted – something I am guilty of all the time despite knowing better. It's also a good example of some of the more useful/helpful things the old blog achieved - helping someone solve a bit of a small mystery. Back in 2010, a nice fellow called Sean Olson posted some old pics on Gwulo.com in an attempt to wind up some remaining loose ends concerning his family history. It is the culmination of a decade-long research project – the result of which can be found on Sean’s website: The Hong Kong Legacy. Sean had several old photographs taken in some difficult to locate places and was having some difficulty identifying where they may have been taken. Anyone familiar with both of my blogs should know by now that this is something I find enjoyable and sometimes challenging, and of course the regular posters over at Gwulo are also very handy at this kind of thing.

The photos that piqued my own interest were related to an area not far from where I used to live in Tai Po and was quite familiar with (or so I thought). It’s the area now occupied by a Cheong Kong development called Deerhill Bay, but before the development was built (in 1998) the land was the site of a children’s home/orphanage called The St. Christopher’s Home, run by the Anglican Church.

The Avenue of Stars: A Guide For The HK Film Ignoramus Part 2

Here is part two of my idiot’s guide – part 1 found here – (photos courtesy of Thomas Podvin’s excellent HKCinemagic site unless otherwise stated). I should quickly point out that some of the "stars" who were living when I first did this post back in March 2011 (wow! three years has gone quickly hasn't it?)
may have passed away in the intervening time. Still being an ignoramus (sadly the enlightenment achieved by this post was short-lived) I may have left out a few bucket-kickings without realising so please feel free to let me know otherwise. So let's carry on where we left off at number 26.

The Avenue of Stars: A Guide For The HK Film Ignoramus Part 1

As promised, here are the original posts that eventually led to my little article for HK Time Out back in 2011. For the record, my opinions about the place remain unchanged: the concept probably looked good on paper (actually, on second thoughts it probably looked crap on paper too) and the execution is just really very ‘HK’. I can’t put my finger on it other than to say I just get a general feeling of complete and total naffness when I am there. In fact, it’s the same feeling I get wandering through the Peak Tower and through Ngong Ping village – a sort of disneyfication that makes everything seem really false and totally cheesy.


Naffness aside, I have one major peeve that is really my own fault – although I consider myself someone who knows a thing or two about the HK film industry I can’t for the life of me recognize at least half of the names that are stuck to the floor along the waterfront. It’s a true education in how much of an ignoramus I really, truly am. For some of the names I had no idea if they were male or female. Well, rather than take the easy option and forever bitch and moan about how crap it is, I’ve decided to try and accentuate the positive and provide you, my fellow HK film ignoramuses, with a guide to the Avenue of Stars for the non-HK Film aficionado.
Read more »
Posted by Phil at 21:45 No comments:

The Tai Pak floating restaurant was once one of those must-see places in Hong Kong. I suspect a combination of the novelty, the decoration and the fact that it featured in a few Hollywood films that were shot on location in Hong Kong. I've sifted through many films now whilst doing research for my film locations blog and I can confirm that a large majority of films have featured Aberdeen Harbour and its famous floating restaurants at some point. 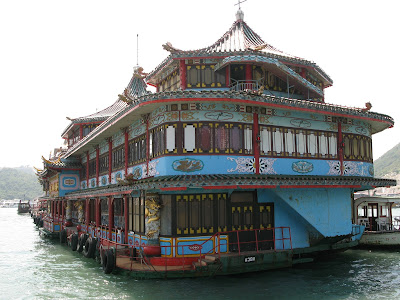 On the odd occasion, not so much these days, I browse a few travel forums and every so often up crops a recurring classic along the lines “I got ripped off buying a camera on Nathan Road”. The posters are invariably new to the forum and are posting “to warn others” – the irony being that if they had bothered to read the forum before their trip then the copious amounts of other similar “ripped off” warning messages may have caught their attention and saved them some time, money and the inevitable deep psychological scarring.

Yes, the former Bela Vista Hotel, because these days this building is used as the residence of the Portuguese Consul in Macau. My initial post was spurred on after reading a very interesting book called Macao by Phillipe Pons (written in the late 90′s and translated from the original French print). He provides such a great summary of its colourful history that I felt the need to share. Understandably, Pons spends a lot of time lamenting over the fact that the modern Macao is now like a Disney Theme park. When you consider that he wrote that in the 90's before the current phase of Disneyfication (i.e. Grand Lisboa, reclamation of the Cotai strip etc), then I dread to think how depressed he must be feeling right now :-(