Golden Studios - Then and Now

As a long time HK film fan, Golden Studios holds particular interest for me because it was the filming/production location of many classic kung fu films during the 70's and 80's. Golden Studios was, of course, the name of the studios owned and operated by Golden Harvest. Sadly the studios (and, in fact, Golden Harvest's film production activity) is no longer around, but I managed to obtain an aerial photo (from the Mapping office for $120) of the area in Diamond Hill where the studio was located so that at least we can see where it was in relation to the area now. 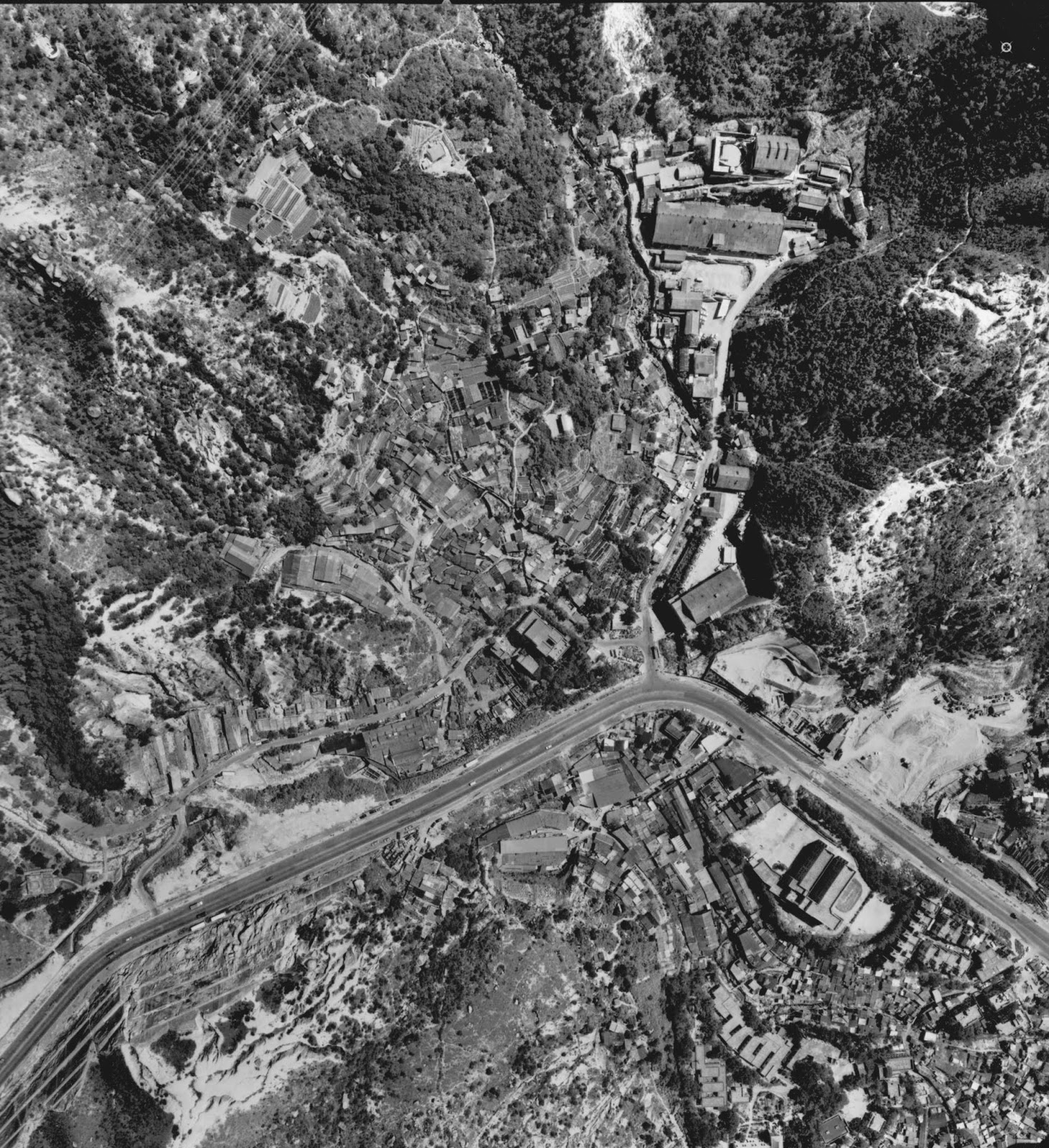 This aerial picture was taken during October 1973 (from 1700 ft), not long after Bruce Lee - GH's break out star - had died and also not too long after GH took over the studios in 1971, but well before the company decided to build a Chinese village/street set in 1979.

The studio lot is the triangular area in the top right. I’ve oriented the photo so that east is at the top, itr makes viewing easier I feel, but in reality remember that really the picture should be rotated 90 degrees to the right. The lot was demarcated by hills to the top and right (east and south) and a stream to the left (north) and the point where the stream meets the road is where the studio’s front gateway was. 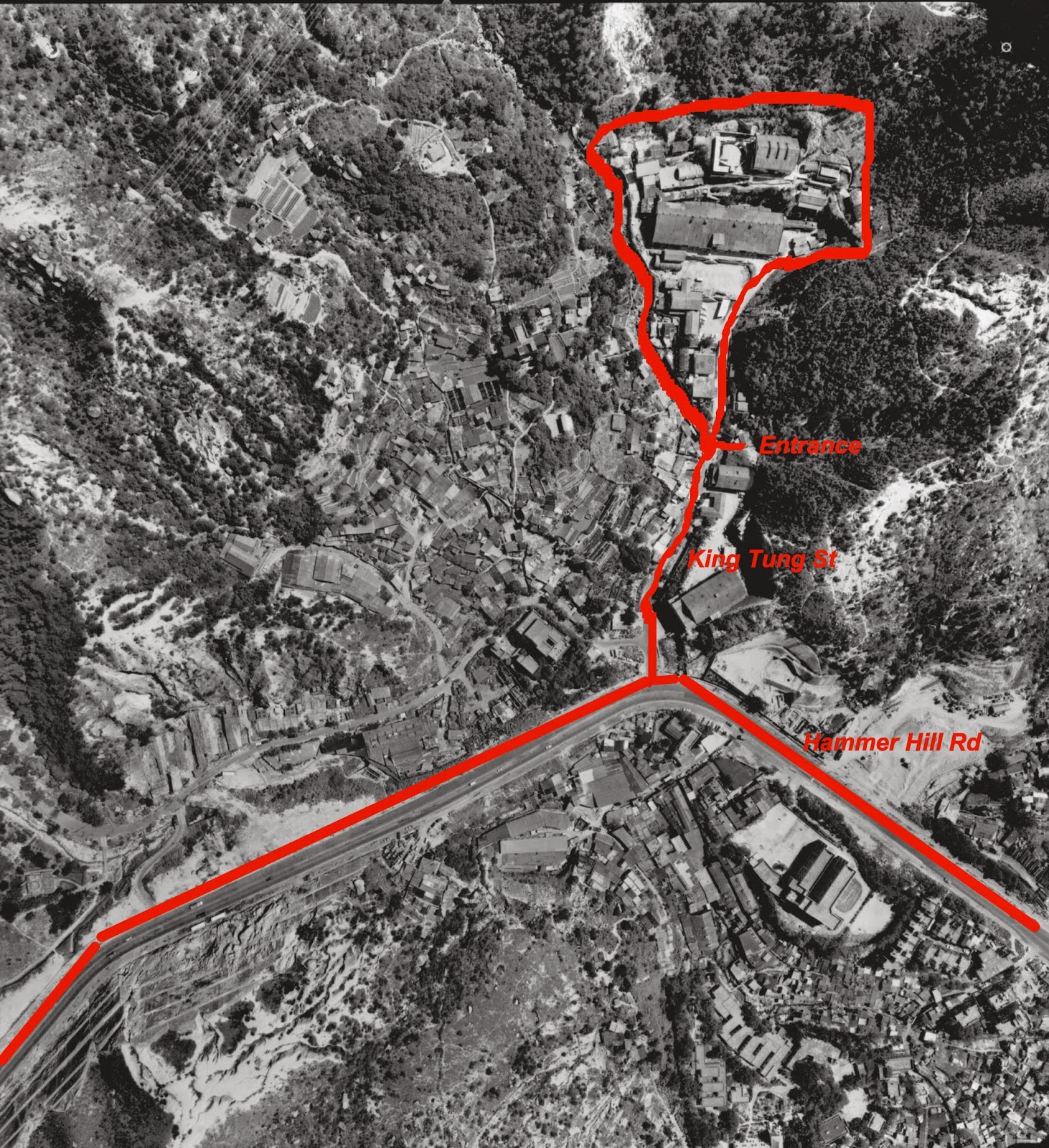 The large road at the bottom is Hammer Hill Road, with the smaller King Tung Street leading from Hammer Hill Rd up to the studio gates.Here’s another version of the picture showing you these points. Here is a closeup. 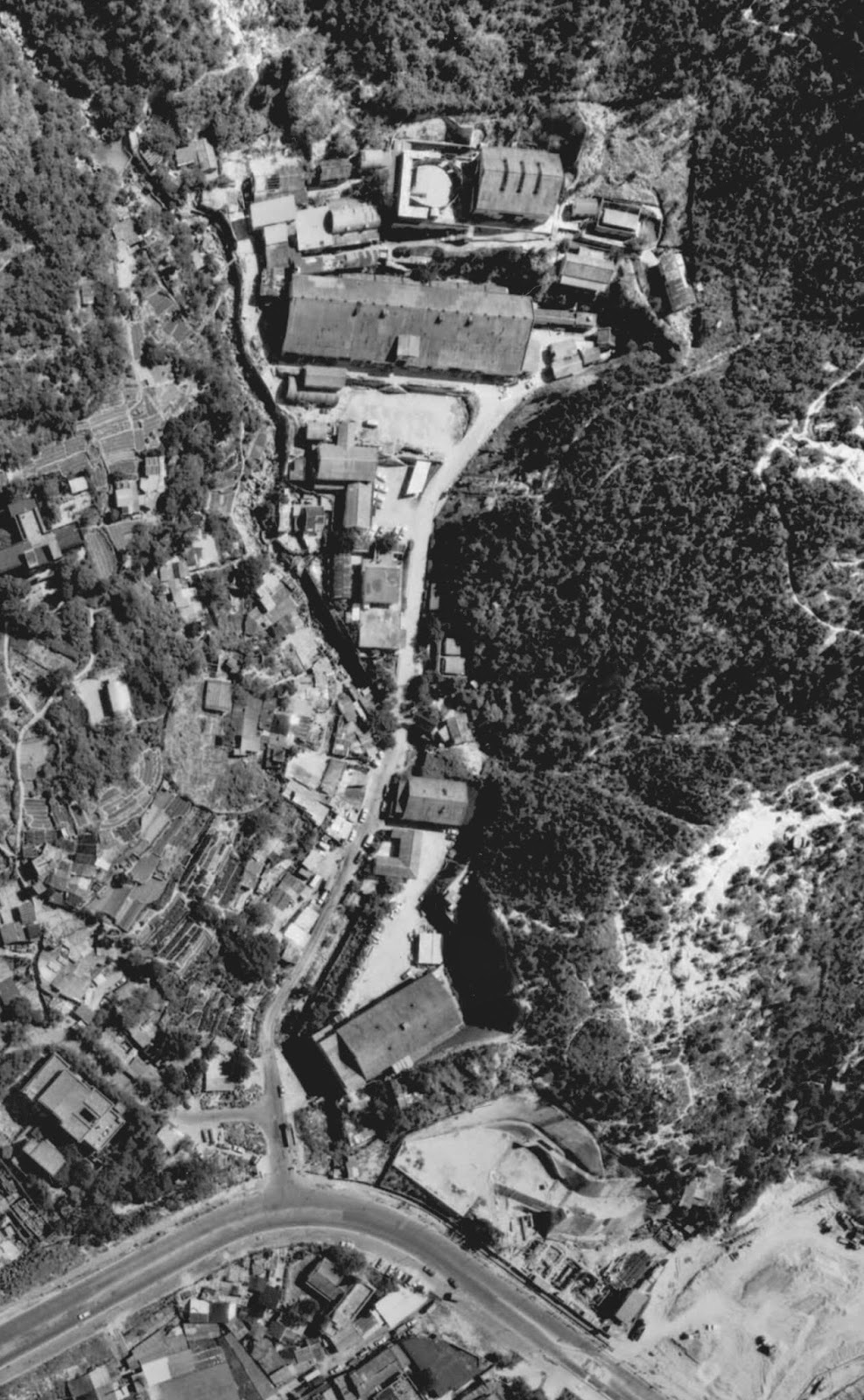 The large rectangular block in the middle is the main studio block which contained the two main sound stages: A & B. A was on the right side, B on the left. In front of the main studio block is a car park - a familiar sight to any Bruce Lee fans because he had quite a few pictures taken here. I guess the other buildings are a mix of offices, dubbing studio, film development lab, editing suites, costume dept and the like but which one was which? Sorry, I don't know at this time.

So anyway, what happened?

You may or may not be aware that Raymond Chow (and his two colleagues Leonard Ho and Leung Fung) left Shaw Bros in 1970. Raymond was upset because his main rival, Mona Fong - ex-singer and Sir Run Run Shaw's love interest - had been promoted over him and essentially became his boss and the holder of the purse strings.

So, Chow took some money and talent with him and set up the new company based on a more western-style studio model - whereby GH would provide funding and facilities to independent film companies. GH would then distribute the films around Asia. If the film was successful then the independent film company involved would share in the profits. This was vastly different to the Shaw model which basically controlled everything from inception to production and distribution and kept all its staff on fixed salary terms.

However, when GH first started up, it had no physical studio space and many of its early productions were filmed on location or at rented sound stages (of which there were several available) or a bit of both and it wasn't until Cathay Films (MP&GI) announced their withdrawal from movie making in HK that an opportunity to take over their old studios arose.

These studios, now called Golden Studios, were once some kind of saw mill and had also been the home of an even older film company called Yung Hwa Motion Pictures. GH did a deal with Cathay so they would take over the lease on the studio and Cathay would become the sole distributor for GH films in Malaysia and Singapore.

The creative freedom afforded by GH's production model meant a lot of talent left Shaw's and started their own production companies in order to make films with GH. Not all films were hits but a steady stream of new and fairly inventive films meant that Shaw's long-held power over the homegrown film industry started to erode. As it turned out, Shaw's pretty much ceased all film production in the mid-80's and instead concentrated on television. TVB's (i.e. Shaw's) old TV studios on Broadcast Drive were closed down and the facility was moved to the old Movietown lot in Clearwater Bay. With Shaw's out of the way, GH went from strength to strength.

And then it all went wrong.

At the end of the 1990’s, the Govt – who owned the land that Golden Studios was sitting on - decided to include it in a land sale for redevelopment and told GH it would no longer be renewing the lease. This left GH without any studio space and a search for an alternative site was launched. A new plot of land was found in the newly reclaimed Tsueng Kwan O industrial estate and either through pure coincidence or just out of sheer spite (probably the latter given their histories) Shaw's also decided they wanted the plot for new TV studios and a bidding war broke out between the two companies. Shaw's eventually won and GH was effectively stopped from film production due to lack of studio space. GH made their last film in 2003 (although they had already lost their own studios by then) and then moved over to financing, distribution and cinema management - areas of business they already were involved in but now without much choice to do anything else.

The old studio lot at Hammer Hill stood vacant and derelict for a couple of years (and there are stories about how much old equipment and celluloid was left dumped on-site) before the site formation work started for what was about to replace it - a Govt subsidised housing estate called Kingsford Terrace. The estate was completed and on sale by 2003, but due to the SARS crisis it was immediately withdrawn from sale and proceeded to stand empty for several more years. Here are some Googleearth snaps over the past few years. 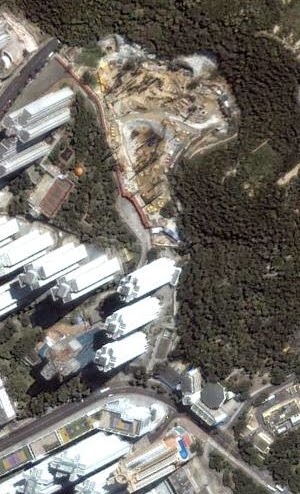 The high-rises along King Tung St had actually been built several years before (around 1984) and are called Sun Lai Garden and had already replaced a smaller studio called Asia Studios. So, even before the GH lot was developed, the studio area was slowly being surrounded by high-rises, making outdoor filming of period pictures slightly troublesome. The above shot shows what looks to be initial site formation but it also looks as though the site boundaries haven’t changed even if the buildings inside have. 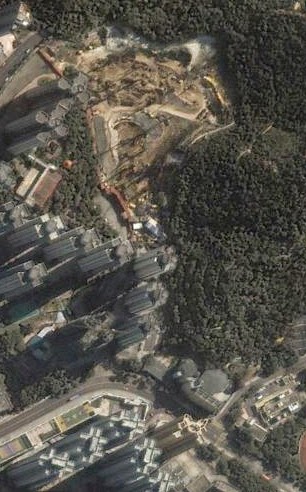 It looks as though the old stream was filled in (or more likely directed underground) and some semblance of a perimeter wall was being constructed. But you can still see vaguely the shape of where the parking lot was. Film history slowly being removed. Here is a shot the following year. 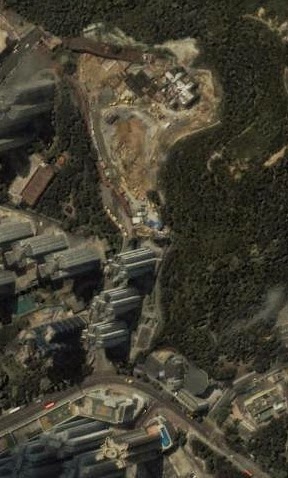 The following year you can see that the construction of block 5 at the back is already underway and block 4 next to it has also commenced. There would be 5 blocks in all actually and King Tung St would be extended slightly up the side where the old stream used to be. There is no aerial snaps on Google between the years 2001 and 2008, so the next shot we have is from the latter years when the development was already completed and sold. 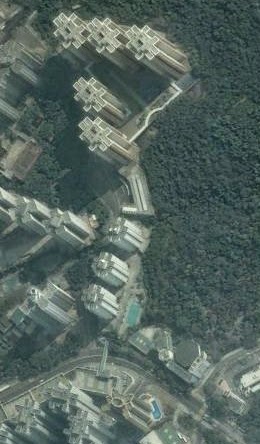 The fact that King Tung St and Hammer Hill Rd remain unchanged - in the main (apart from the extension of King Tung Street I just mentioned) - gives you a good reference for comparing the 1973 close up and the 2008 snap. I’ve put in the block numbers below. 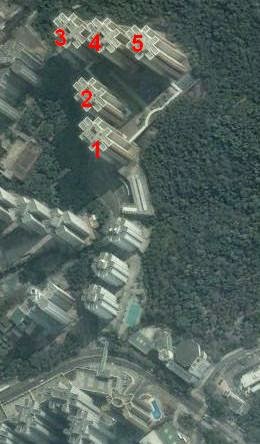 You can just about see that Block 1 now stands where the old entrance to GH was. Block 2 pretty much occupies the space where the car lot and main studio building was.

And finally, a comment from Mark who was lucky enough to visit the site in 1998...


I visited the GH studios on 24th July 1998 when Jackie Chan was shooting part of the fight scene for RUSH HOUR that was set in the LA Convention centre, with the bomb vest and the large vase.. it was an amazing place! such a shame they knocked it down and built flats instead!