Fist of the Unicorn – another ‘lost’ Bruce Lee location rediscovered

Not long after finally nailing down the location for the fight scene between Sammo Hung and Bruce Lee at the beginning of Enter The Dragon, I turned my attention to the next Lee-related film location challenge. Strictly speaking the film in question, Fist of the Unicorn (a.k.a Unicorn Fist/Bruce Lee and I), wasn't a Lee film at all - he had simply come to the set as a favour to his friend (the star, Unicorn Chan) and helped choreograph a fight scene. The location involved was a seemingly non-descript rural place with a small river and, other than that, no clues were obvious. It was an interesting bit of investigation and worthwhile repeating for any curious Lee fans who didn't read it when I originally posted back in 2011.

I was curious about this place simply because I couldn't find any other information about it, and I was in full-on Lee location finding mode. This place seemed to have eluded other fans and so I figured it would be good to have a stab and see what I could find.

The back story is also worth outlining briefly because it's a good example of the sort of stuff Lee was dealing with towards the end of his life.

Lee had returned to Hong Kong to try and secure a film deal on the back of the various film and TV shows he had been doing in the US. Unbeknownst to him at the time, the Green Hornet series had made him into a local hero and as a consequence he was in a good position to try his luck. One of his childhood film star friends, Little Unicorn (whom he had co-starred in an old Cantonese films called Blame it on Father), had pulled some strings for Lee and got him some face time with some of the local film makers including Sir Run Run Shaw. It was a great example of what is known in Cantonese as gwaan hai (關係) but is perhaps more familiar by its pinyin form: Guanxi. Basically, the personal networks and favour-granting that are quite fundamental in Chinese culture and are probably largely to blame for the massive corruption culture over here...

Anyway, as a result of these arrangements Lee was indebted to Unicorn and, in the spirit of reciprocation, knew that one day he would be duty bound to offer help in return. As it turned out, Lee was offered a tempting deal by Raymond Chow at the newly formed Golden Harvest and the rest is history. Over the next 2 years, Bruce made three films for Raymond Chow (two of which also featured Unicorn in small roles) and shot to super stardom in HK.

The circumstances aren't clear, but sometime around the middle of 1972, Unicorn approached a production company wanting to make a film and used his friendship with Bruce to secure a deal. The deal was that he would get a starring role as long as he could rope in his buddy in some way or another, that way the film could exploit Bruce's involvement and hopefully make some money.

Bruce walked into the situation without much choice and with full knowledge that he was being exploited, but it appears he underestimated what the production would do with the footage. It's not known for certain what he was expecting, perhaps he just thought his name would be used in the credits as fight choreographer? But what actually happened that Lee was filmed for several minutes putting some of the actors through their paces in preparation for a fight scene. Whether or not he was aware of the filming isn't clear but the footage was used at both the beginning and end of the film and a double (filmed from the neck down wearing the same clothes!!) was used in an inserted scene at a temple.

When the film eventually saw the light of day in the first few months of 1973 and was marketed as a Bruce Lee film, well, you can imagine that Lee was a bit peeved and it is my understanding that he launched some sort of legal action against the film makers. I don't think it was resolved before his death (he was also in the middle of suing one of HK's tabloid papers for other reasons when he died), and so we are left with a fairly bog-standard kung fu flick with all the usual stuff going on, but with some footage of Bruce Lee messing around with the actors (if you are curious, you can still view the film trailer here)

Anyway, let’s get back to that location. The available footage was filmed somewhere near to what looks like a river, and if you watch the film you will know that this river also has a very distinctive bridge going over it. So here are a couple of screen grabs to set the scene.

That’s Bruce centre-screen. Note a few things: the river in the background (in the video you can see it is flowing towards us) and the bend it makes at the back. These were my first clues to the location. Let’s see another picture.

This one gives us a few more clues. First is that someone has disappeared into the background and dropped down onto the river bank (you can see their head between the two guys on the right). Also notice the partially exposed river bank in the background – can you see the dark line that runs along the middle? It’s a tidal mark and you should make a note of it because we will come back to it later.
The next shot is actually taken from the film and I’ll be honest, this was the clincher for me. It took a while to identify but anyway, here it is as it appears on film. 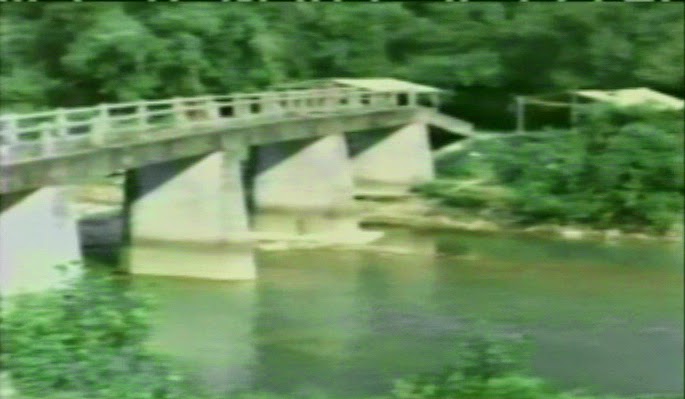 This bridge features a lot in the film. It is basically next to the place where the young boy – played by Meng Hoi – lives with his mum. So it’s no surprise that a lot of filming took place around here and, of course, was next to the spot where Bruce was filmed doing the fight rehearsals. Here is a more modern shot, albeit taken from the opposite side of the river bank. Many people familiar with Sai Kung countryside will probably be able to place this bridge immediately once they see the next picture. 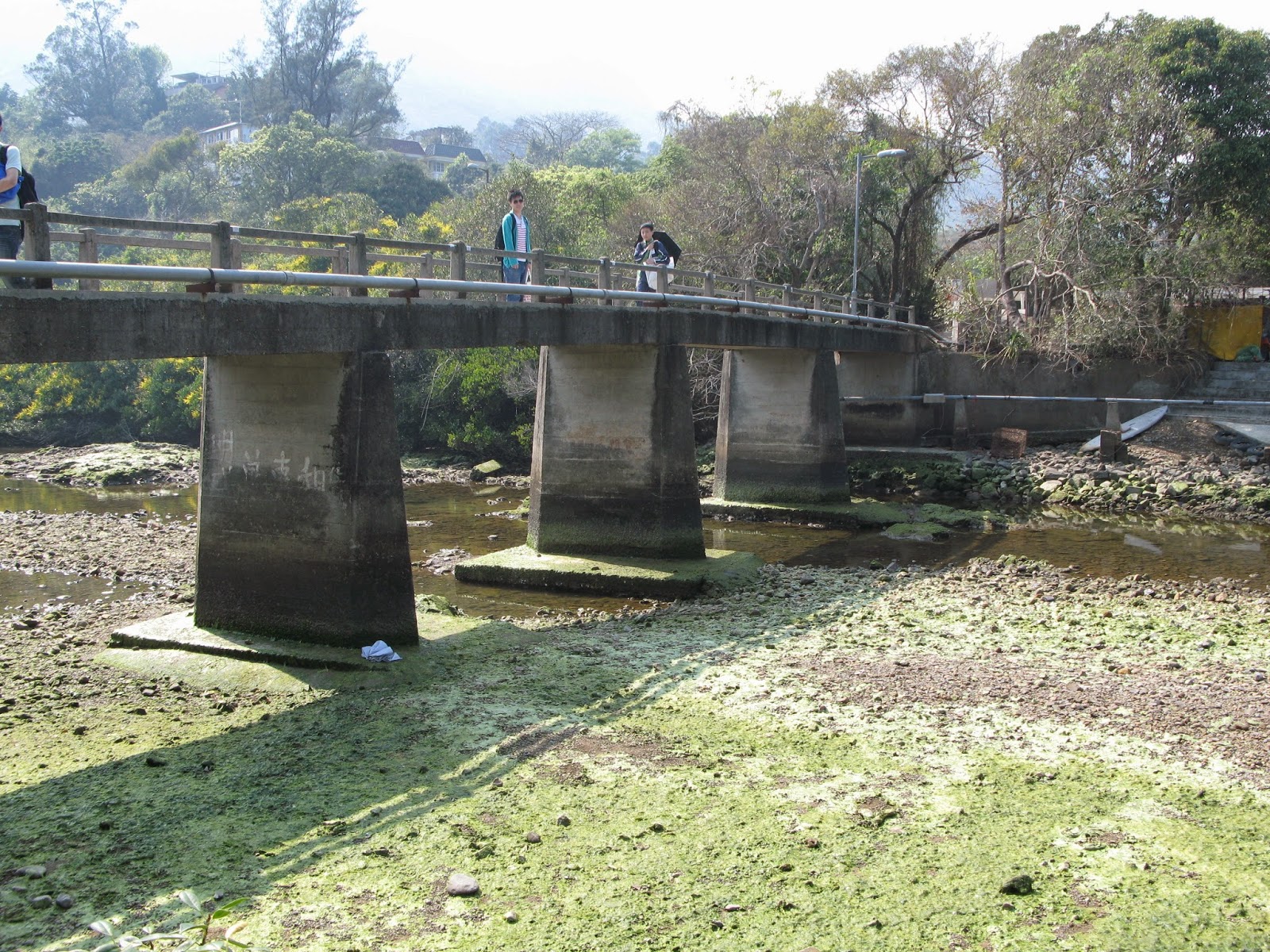 Yes, that’s right, this is the famous stone bridge that crosses the tidal river in Pak Tam Chung – also known as the Fuk Hing Bridge. And, yes, that IS its actual name! In case you need further convincing here is a shot from a HK Govt website that shows the background ridge-line much better than my shot (when I took these photos it was fairly hazy). See it in its original context right here.

You can see the same (okay, it's been stretched a bit by the aspect ratio of the film) bumpy ridge-line in the background that can be seen behind the actors in the screen grab below. 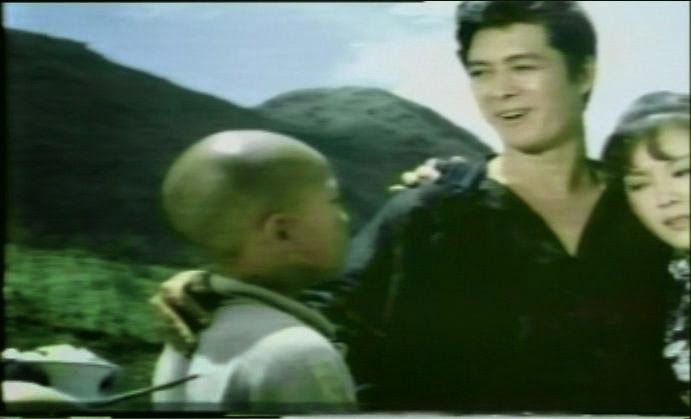 So what about the place where the fight choreography was going on...where Bruce was being filmed? Well, it’s not far away from the bridge – just a few metres in fact. The actual spot now looks to be over grown and has the Pak Tam Chung nature trail running through it (complete with concreted pathway), but the general area looks quite similar. I can confirm that there is a flowing ‘river’ as seen on the clip but it is a tidal flow from the sea which explains why in the clip the water is running towards us - it was most likely filmed in the morning during an incoming tide. It was doing exactly the same when I was there on my exploratory trip.

There is also a river bank of sorts. It's not seen in the footage but we know its there because someone walks down to it. It's largely rocky and algae covered, but the one thing I did notice (and, remember, I told you to take a note of it) is that the opposite bank of the river – with its dark tidal stripe running along the middle - looks the same as it did in 1972. No surprise really. Here is a shot from my trip. 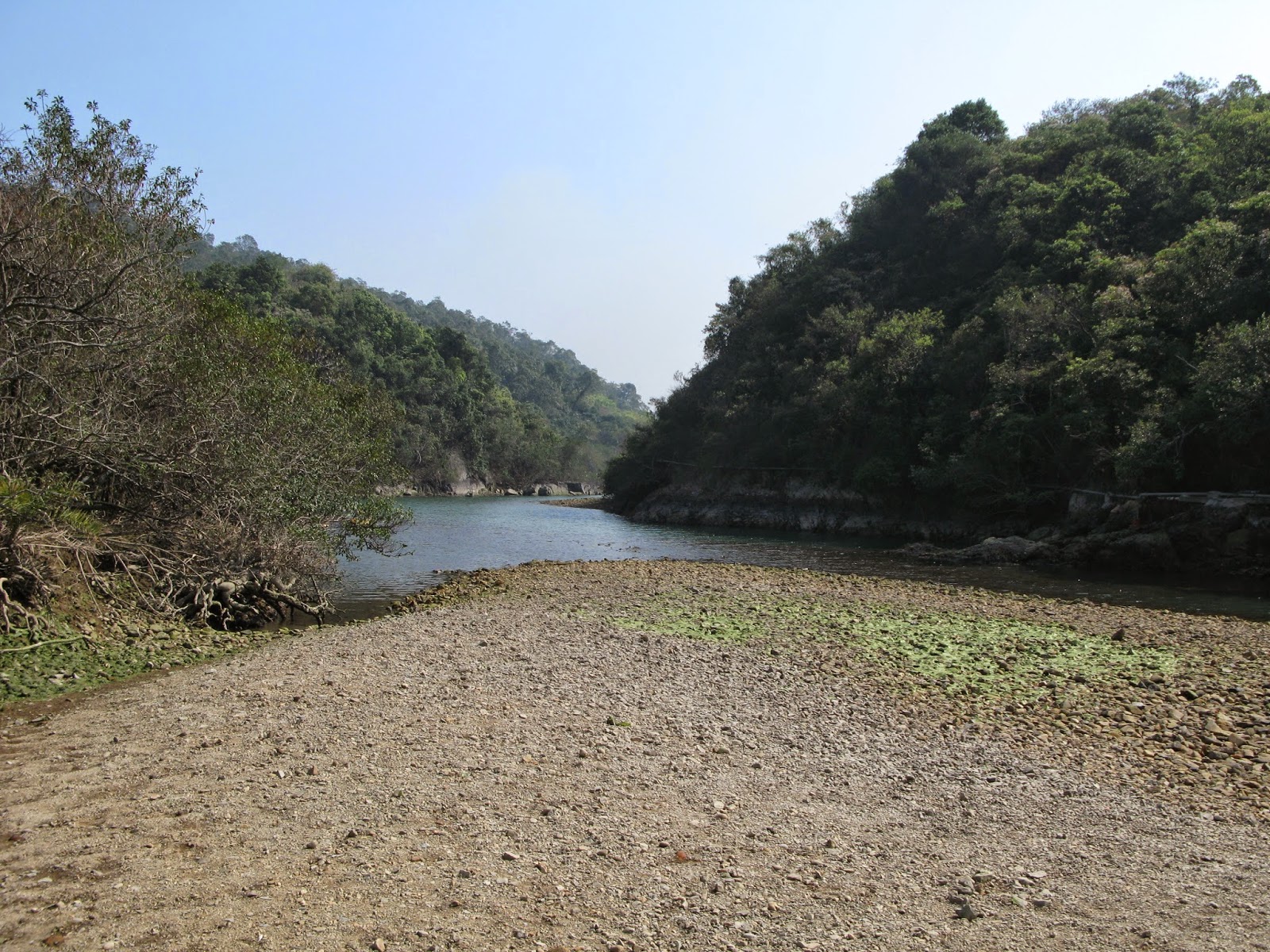 Compare it again (but remember the film grab is slightly stretched by its letterbox aspect).

Now, I couldn’t create the exact angle from the exact point because it's too overgrown. My camera should really be about 30 or 40 feet to the left of where I was standing so the background isn’t quite perfect - but this is as close as we can get after a break of 39 years. However, even from this closer angle the black line along the far bank is a perfect match. In case you can’t see it here it is indicated. 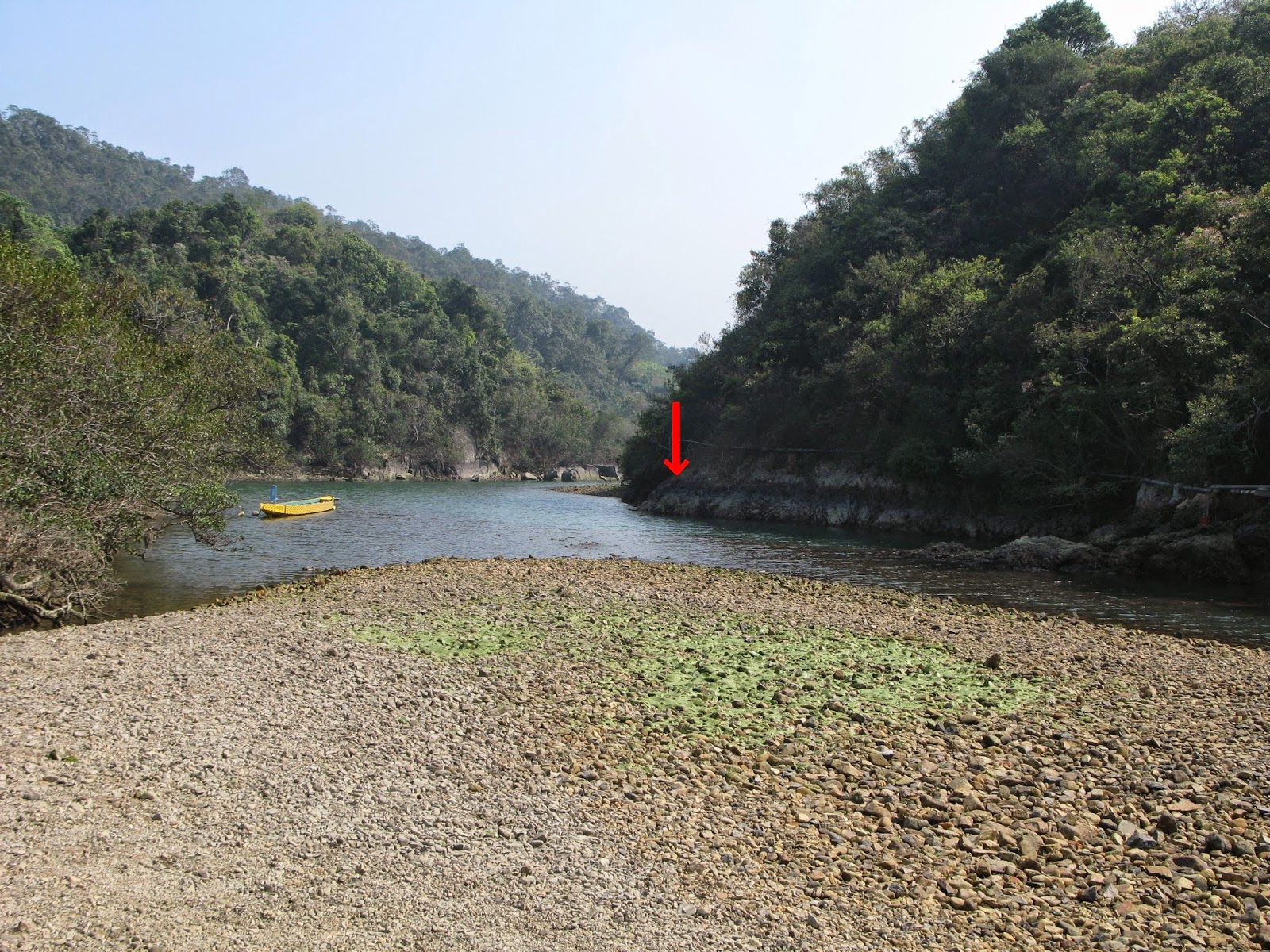 I reckon that the Pak Tam Chung nature trail pathway runs along the edge of the area they are on (where the guy’s head is) because even today there is a bit of a steep drop onto the river embankment.

Anyway, for those fans who are still keen to visit Lee-related film locations then you can easily get to this place by catching the #94 bus from Sai Kung bus terminus and get off at the Pak Tam Chung barrier gate (which marks the entrance to the Sai Kung Country Park). Walk along the road on the right hand side and after a couple of hundred metres you will see the bridge immediately on your right. 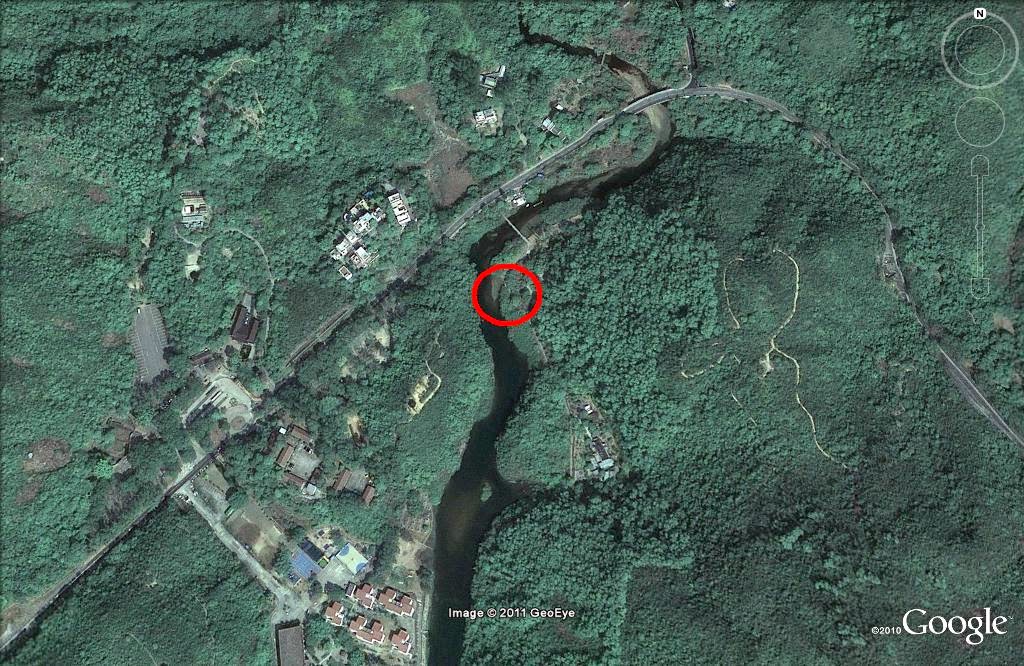