And then there were three...the end of Tung Tak Pawn Shop

Those interested in Hong Kong's built heritage may already know the news that the Tung Tak Pawn Shop on the corner of Marsh and Hennessy Roads is currently being demolished to make way for a high rise. It's a sad time for heritage conservation (actually, it always seems to be a sad time for it) because this building was one of only four remaining columned corner shophouses that feature a curved facade.

Its fate was decided some time back and even when I included it in this post about shophouses, I was aware it had been slated for the wreckers ball. But still, it's a great shame that a stylish and historic building such as this will just end up being replaced by some bland glass box to match all the other new buildings in Hong Kong. 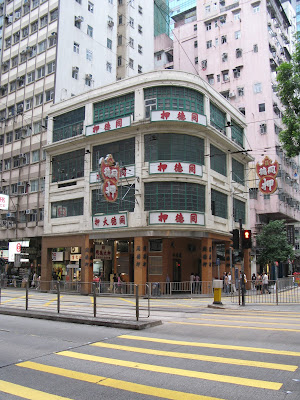 Although Hong Kong has lots of curved corner buildings, only a small number are of the columned canton-style shophouses and this is why I really think the Government's Antiquities and Monuments Office (aka the AMO) should step in and at least try and do more to look after the final remaining three.

Actually, this is exactly what they have done for one of them. Several years ago the Grade 1 listed building better known as Lui Seng Chun (built in 1931) which stands on the corner of Lai Chi Kok Road and Tong Mi Road was earmarked for revitalisation. The project, completed in 2012, restored the building to its original form - many of the balcony spaces had been enclosed with glass - and given to the Baptist University to use as a Traditional Chinese Medicine centre. This was only possible though because the original owners of the building had agreed to donate the building to the Govt. I think most people would agree that the architecture is very attractive and well worth the effort to preserve. 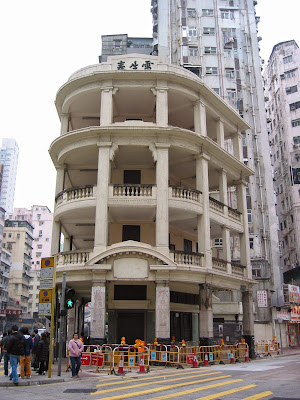 Of the other two remaining curved shophouses, both are located in Sham Shui Po District which encompasses most of Kowloon to the north east including Shan Shui Po, Shek Kip Mei and Cheung Sha Wan. The following building, which is very similar to the Tung Tak Pawn Shop in style - although on two storeys - is located along Castle Peak Road at the junction with Fat Tseung Street. There don't seem to be any construction records online which almost certainly means the place was built before the war. Many of these older buildings were replaced in the 1950's and 60's and even their replacements are now being replaced themselves, so this building is a real survivor. Let's hope it stays that way. 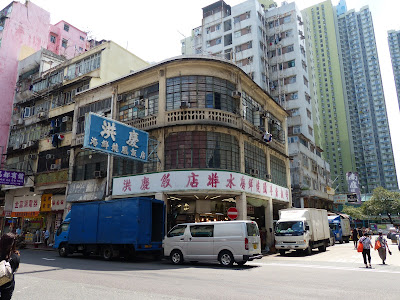 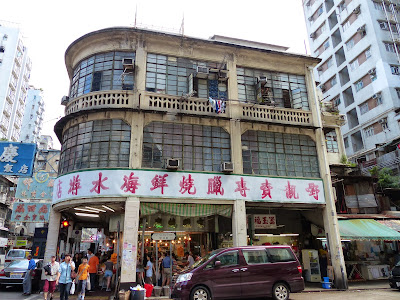 The final building is located along Kwei Lin Street at the junction with Yu Chau Street and it seems to have an owner who is more interested in keeping it (for the time being at least). I first visited it back in 2010 and took the photo below which shows some of the features as well as the roof section. Since moving to Kowloon though I've been back several times and as you can see by the later picture at the bottom, the building has undergone a renovation, of sorts, ad been turned into a mini-mall. You can still make out the features but I think the giant hoarding ruins it a bit. Still, at least it wasn't demolished. 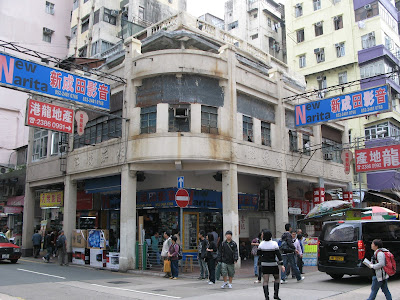 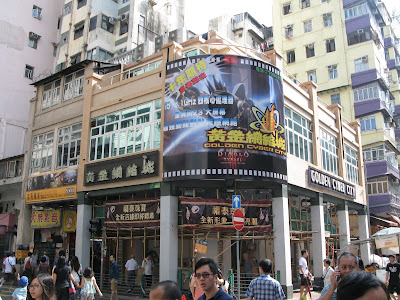 So there you have it, the three remaining curved Canton-style shophouses, let's hope the Govt will at least try and keep a hold of the latter two as well as they have with Lui Seng Chun.
Posted by Phil at 00:32