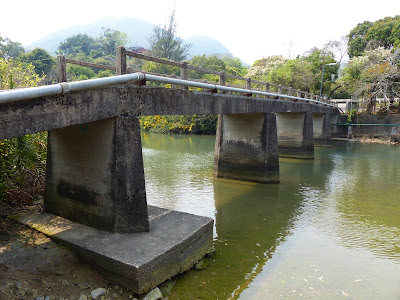 For those not familiar with Mr Coates, he was a Colonial administrator who eventually became the District Officer of what was most of the New Territories in the post-war period. He also went on to write extensively about Hong Kong and Macao and the surrounding region in both fiction and non-fiction forms. Wikipedia has a decent list (I have no idea how comprehensive it is) of his books here.

Anyway, following on from our rather popular posts on locations in Martin Booth's Gweilo book (US Title: Golden Boy), my fellow Gwulo'er had taken upon himself to do something similar for Coates' aforementioned memoir. From the sounds of it he had managed to identify a fair number of places mentioned but was still having problems finding a certain bridge mentioned in the last couple of pages of the book as Coates describes flying out of Hong Kong. The paragraph is excerpted below.


"The aircraft took off in the direction of the sea, and having a seat on the port side, the whole of the eastern part of the district lay for a few precious minutes beneath me...And then I remembered something. Scanning one of the more remote but fertile valleys, I detected a minute white spot. It was so small that only the forewarned eye would have found it.

It was a bridge, sturdily built in concrete and stone, across a river which flooded seasonally; and its main purpose was to enable children from three or four villages on one side of the river to reach their school....Built into the side of that bridge...was a large slab of white granite, on which was engraved the date of the bridge's construction and a brief account of the circumstances...

Heading the list of names on that stone was my own, with my style and title.
My name on that inscription beside the bridge was...my Chinese name -  Kao Tze - and...the title of office was that of an Imperial Mandarin.
That inscription was my sole memorial..."

Although being left to the last, the inscription Coates is referring to is really why the book was given the name it was and I recommend you read it in its entirety. It's a product of the time but still a worthy memoir full of interesting snippets of information.

Well, getting back to the identity of the bridge in the book, I gave my opinion to my friend and made a promise to visit the bridge again one day to examine the memorial stone and see if we could confirm one way or the other. And then I forgot all about it... 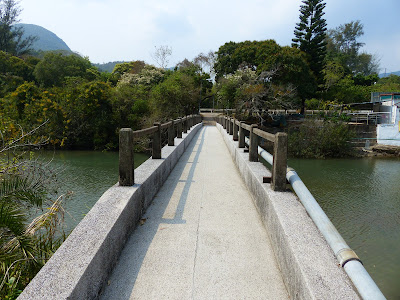 ...until a few weeks ago when I decided on a gloriously sunny day to make the trip. I had two objectives actually, the first was to see what had become of the old house that once stood by the bridge (and was featured in the aforementioned film) and the second was to take some pictures of the memorial stone so I could go home and study it in the comfort of my front room.

The concrete and stone description, as well as the mention of it being white, made me convinced that Fuk Hing Bridge was a likely candidate and the description of the flooded river sounded right - actually it's a tidal inlet but is no doubt victim of the frequent flash flooding that can happen in HK during the stormy and wet summer months. 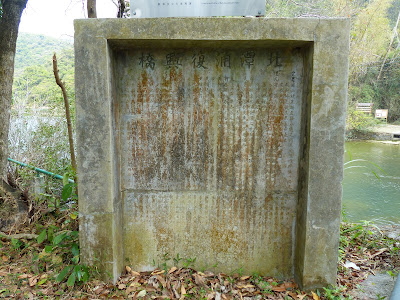 All I needed to know was the Chinese characters for Coates' Chinese name, Kao Tze. The romanisation is a bit old but could have corresponded to the Mandarin Gao Zi (or Gou Tsee/Jee in Cantonese). I was a bit disappointed to hear that my friend's Chinese wife had already looked at the stone but couldn't find any reference to a Kao Tze, but I decided to take a peek anyway and see if I could find anything. Here's a closeup of the section of the stone that shows the inauguration date and the start of the names. 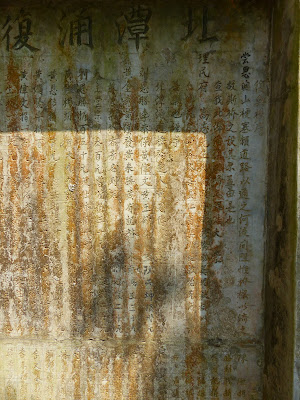 I appreciate that most people reading this won't be able to read the Chinese, and to be honest although my Chinese literacy is probably 100% better than most "expats" living in Hong Kong, it is still only limited to a few hundred characters learned by accident through helping my children with their kindergarten and early primary school homework.

That said, the word Kao (or Gao/Gou) could refer to a large number of Chinese characters - depending on the meaning - but the one I am most familiar with means "tall" or "high" and looks like this: 高

So that was really my starting point and luckily it wasn't long before I found an occurrence on the stone. On the stone it is followed by the following characters 志先生 which added together make a possible name ( 先生 is the Chinese for "Mr" although it literally means "first born").

Altogether 高志先生 means Mr Gao Zhi which is very similar to the name Coates describes in his book. A quick post on Gwulo was answered by a couple of the local contributors who are always helpful to the illiterates like myself and it turns out this was indeed Austin Coates Chinese name, but what I hadn't realised is the larger characters above his name, 理民府, which denote his role as a Govt official.

I've outlined all the relevant characters on the picture below. The blue rectangle shows Coates' Govt designation/title and the red one highlights the formerly elusive name. 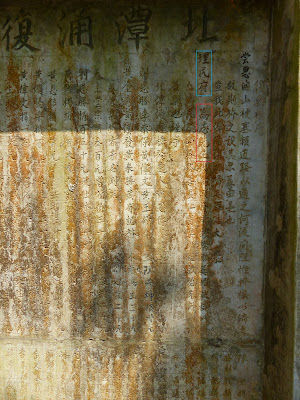 So there you go, a small mystery solved and a memory brought back to the fore. Austin Coates' sole memorial to his work as a District Officer can still be seen on this stone and hopefully the people of Sai Kung can start referring to the bridge as the Austin Coates Bridge rather than the Bruce Lee Bridge.
Posted by Phil at 19:51