How You Can Show Support for the Anti-Extradition Bill Protests

I know this is a bit off topic for my usual cultural/historical posts but I figured I would add my contribution to the anti-Extradition Bill protests that have been in the world news over the past few weeks.

The below image popped up on Twitter a few weeks back and it is basically a list of prominent local business people (their Chinese names in bold) who showed support for the Extradition Bill amendments, and a list of the businesses they are involved in (as owners, directors etc). For obvious reasons there were quite a few requests for an English version of this list so that those who can't read Chinese could show some support for the protests by avoiding spending their money at these places.

Anyway, I took a bit of time out of my day to provide an English translation and I encourage anyone in Hong Kong who wants to show some moral support for the protests to think twice before they put money into any of the businesses listed below. 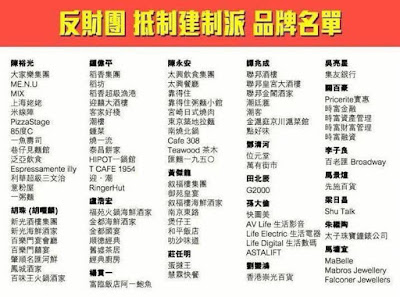 I've only translated the businesses that are referred to by their Chinese names and have left out those with English names. But for those interested in knowing all the people in the list, the ones I didn't bother translating are: Michael Tien Puk-sun (田北辰), the founder and Chairman of G2000, Frank Leung Yat-cheong (梁日昌), founder of Shu Talk, Brian Li Tze-leung (李子良), president of Broadway Photo Supply Ltd and finally Maximilian Ma Yung-kit (馬墉傑) the founder and Chairman of MaBelle et al.

On a side note, it's interesting to find out that Thomas Lau (Chairman/CEO of SOGO HK) is the brother of fugitive tycoon, Joseph Lau. Joseph Lau was convicted on bribery charges in Macau a few years ago and promptly scarpered back to HK to avoid gaol. He was initially (understandably) against the bill until he came to an agreement with the Govt that meant his conviction would not be included in the general list of extraditable offences.

Also, I see that Mr Ng Leung-sing is the LegCo member who suggested that the kidnapped Causeway Bay booksellers (a famous case from a few years ago which has some bearing on the current extradition legislation) had been arrested legitimately for crossing into the mainland illegally to visit prostitutes. So you can see the sort of quality people this list includes.

Since this first post went up, a few more companies have shown their support for the Govt and so I have decided to add this addendum to the post that starts with...

Yoshinoya - 吉野家. The reason for the boycott of Yoshinoya can be found here at HKFP.

Bestmart 360 - 優品360主頁. Following several incidents when protesters were attacked with impunity by local Fujianese triad gangs in North Point, it was discovered the Chairman of the Bestmart 360 company was a known affiliate and these shops have been targeted with vandalism in retaliation. I used to shop here for Barilla pasta which was cheap at only $8 for 500g but found that Japan Home Centres also now stock it at the same price.
Posted by Phil at 10:42

New comments are not allowed.